As the second largest continent, Africa has an area of 30.3 million square kilometers, which represents 20.4 percent of the Earth’s land area. The name Africa derives from Roman times. In Roman times, “Africa” ​​was the name of the Carthage area of ​​present-day northeast Tunisia. Later, Africa became the name of the south coast of the Mediterranean and has been the name of the African continent since the Middle Ages.

Geographically, the Mediterranean and the Strait of Gibraltar separate Africa from Europe to the north. Africa has land connection with Asia to the northeast; The Suez Canal is considered the distinction between the two continents. By the way, Africa is surrounded by the Atlantic Ocean to the west, the Indian Ocean to the southeast and east, and the Red Sea to the northeast.

The highest mountain is Kilimanjaro in Tanzania, 5895 meters above sea level. The longest river is the Nile, which has a length of 6671 kilometers, and the largest lake is Lake Victoria in East Africa with a surface area of ​​68,800 square kilometers.

How Many Countries in Africa

Africa is often divided into the regions of North Africa, West Africa, Central Africa, South Africa and East Africa. The continent consists of 54 independent states and 8 territories. In addition, 2 states come with limited or lack of international recognition: Somaliland and Western Sahara. Three states are monarchies, and the rest are republics.

Africa’s largest country is Algeria; the least is the Seychelles. The Gambia is the smallest country on the African mainland.

Surrounded by the East Indian and West Atlantic Oceans, Africa means “place where the sun is hot” in Latin. See below for map of Africa and all state flags. 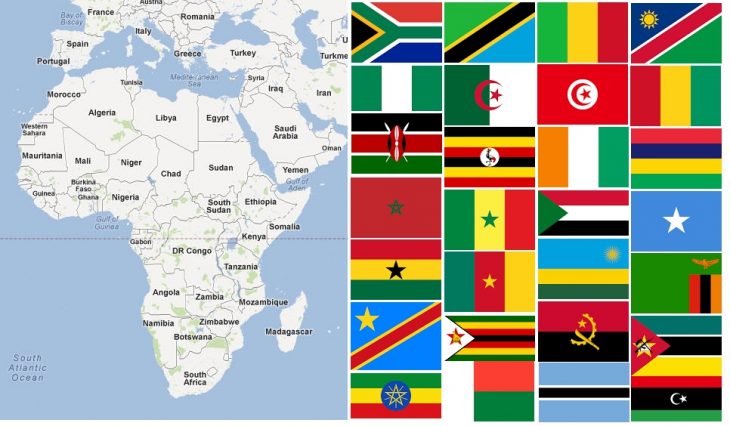 Although most countries are undeveloped, Africa is one of the best travel destinations in the world. Top destinations include Maasai Mara National Reserve (Kenya), Victoria Falls (Zambia), Pyramids of Giza (Egypt), Cape Town (South Africa) and Marrakech (Morocco).

As of 2020, there are a total of 54 countries in Africa. Among all African countries, Nigeria is the largest one by population and Seychelles is the smallest. See the following for full list of African countries and dependencies in alphabetical order:

Besides 54 independent nations, there are also two dependencies in Africa.