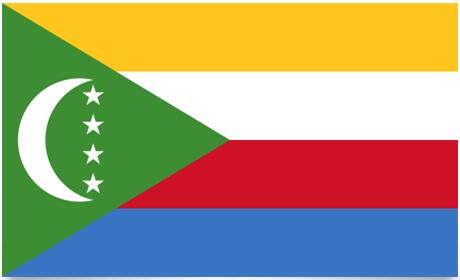 The flag of the Comoros was first adopted in the 2000s. On New Year’s Eve in 2001, the flag with the proportions 3: 5 was adopted. The flag consists of four horizontal fields in the colors yellow, white, red and blue and with a green triangle at the inner edge of the flag. Inside the triangle, there is a white crescent moon and four five-pointed stars that are white. The bands represent the country’s four main islands: Moheli, Njazidja, Ndzuwani and Mayotte. The four stars also represent the main islands.

The island of Mayotte still belongs to France but the Comoros considers it theirs and should belong to their country. The crescent, the stars and the green color are traditional symbols of Islam. The flag is based on an earlier flag that would symbolize the archipelago’s socialist ideology.

The Comoros archipelago lies at the entrance to the strategically important Mozambique Canal, on the “oil route” connecting the Gulf with the West. The four main islands of the volcanic archipelago are Njazidia, formerly Great Comora, Nawani or Anjouan, Mwali or Moheli and Mahoré, also known by the name of Mayotte. On the former, at 2,500 meters altitude, is the ever-active volcano Karthala, whose surface is covered by tropical forest. Of the approx. 100,000 hectares of cultivated land is only 37% used for commercial cultivation of vanilla and other spices. In the surplus area – without access to permanent water supply – food is produced on a self-sufficient basis. The rainwater is stored in reservoirs that are easily contaminated.

The people: The composition of the people of the Comoros reflects the geographical location of the archipelago: an Indigenous population of Malay-Polynesian origin, which is subject to immigrant Bantu and the now dominant Arabs, and, to a lesser extent, people from Madagascar and Indians.

Social Organizations: The Association of Comoros Workers is the largest trade union.

Government: Parliamentary Islamic Federal Republic. Azali Assoumani has been federal president since May 2016. National Assembly with 33 members. Of these, 18 are elected by local assemblies and 15 by direct election.