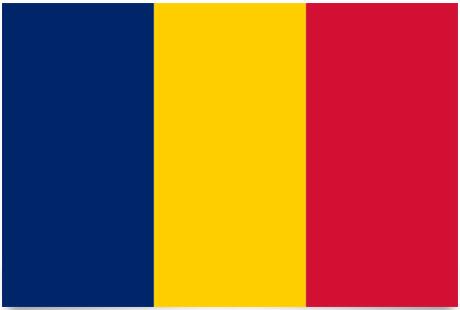 The flag of Chad was adopted on November 6, 1959 with the proportions 2: 3. Like the flags of many other nations, the flag of Chad is a tricolor. This tricolor contains the colors blue, yellow and red where all fields are the same size. Blue is on the far right, yellow is in the middle and red is on the far right. This flag has combined the traditional Pan-African colors with the colors that were in the old colonial power’s flag of France.

The northern part of Chad is covered by desert – the Sahara desert accounts for 40% of the country’s total area – where the volcanic mountain range of Tibesti is found. The central part, the Sahel, is made up of savannahs adjacent to Lake Chad; it is utilized for grazing. The lake is not very deep and is mainly swampy; it is assumed to be the remnant of a larger holding. Half of the lake’s banks belong to Chad and its water comes from two rivers, Logone and Chari. In the southern part of the country, where the soil of the river banks is fertile due to the tide, the best and densest populated areas are found; during the colonial period the economic activities were concentrated here. Cotton is the primary export crop, but the majority of agriculture is very little profitable due to prolonged drought periods. In recent years, the deposits of uranium,the attention of multinational corporations. Desert spread and the local droughts affect every aspect of daily life.

The people: The inhabitants of the north are predominantly cattle nomads, descended from the Berbers and Tuaregs (tubus, quadai); they have traditionally been in opposition to the majority of the population in the south, where the land-cultivating tribes, saras, masses, mundanis and hakkas live. Due to the drought in the Sahel, internal migration is constantly taking place, from the north to the more fertile areas in the south, which has led to some conflicts.

Religion: It is estimated that about 50% of the population is Muslim; 27% practice African natural religions and 23% are Catholics.

Languages: Arabic and French are the official languages. There is also a sea of ​​dialects and languages, the most common of which is sara in the southern part of the country.

Social organizations: The union of trade unions in Chad.

Government: Idriss Deby, President since July 1996, re-elected in 2001, 2006, 2011 and 2016. Albert Pahimi Padacké, Prime Minister since February 2016. Two-Chamber System: 31-member Council, appointed by the President. In addition, the National Assembly with 155 members elected for a four-year term.