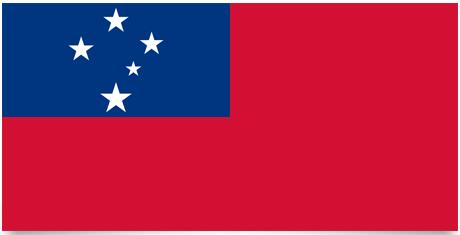 The colors of the flag are traditional for Samoa. The stars represent the Southern Cross, which is the smallest constellation. Red is a symbol of courage, white stands for purity and the blue color stands for freedom.

The design of the flag is reminiscent of the one used when Samoa was a colony under Britain. The flag then had a picture of the English flag in the field which is now blue with stars. There was also an emblem with three palm trees against the outer edge of the flag. The flag was used from July 30, 1922 to January 1, 1962. Samoa’s current flag was adopted on January 1, 1962.

Samoa consists of 4 inhabited islands: Savaii which is the largest (1,690 km2 and 40,000 residents) Upolu with the most residents (1,100 km2 and 110,000 residents) as well as the smaller islands of Manono and Apolina. The archipelago is part of the Samoa archipelago, whose eastern part is the North American colony. It is located in Polynesia, northeast of the Fiji Islands. The islands are of volcanic origin, the landscape is mountainous and the soil is fertile in the low lying areas. The climate is tropical and rainy, but moderated by the ocean’s influence.

The people: 92.6% are Samoan; 7% are “Euronesians” (a mix of Polynesians and Europeans) and a small minority are Europeans who have moved to other Pacific islands.

Government: Tuiatua Tupua Tamasese Efi has been head of state for life since May 2007, when his father died. Tuilaepa Sailele Malielegaoi has been prime minister since 1998, re-elected in 2001, 06, 11 and 16. According to the constitutional reform of 1991, 2 of the 49 deputies are elected in general elections. The rest is appointed by the clan chiefs. The Constitution states that when Tanumafili II dies, the subsequent president will be elected by direct election.