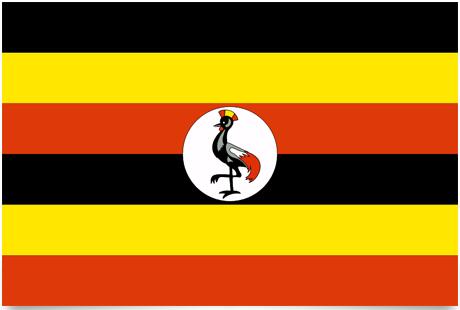 The flag of Uganda was adopted in connection with independence on October 9, 1962 with the proportions 2: 3. The flag has six ribbons with the colors black, yellow and red in that order from above with two of each color. In the middle of the flag is the country’s national symbol which is an East African crown crane with a white circle in the background. The colors were used by the UPC party, which was the leading party when independence came in 1962. The crown crane has been Uganda’s national symbol since colonial times, which is also part of the coat of arms.

Uganda consists of a collection of highlighters that fall slightly to the northwest, where the Nile runs. The largest mountains are of volcanic origin. Among the country’s many rivers is the largest Nile, and 18% of the country is covered by rivers, lakes and swamps. The climate is tropical but slightly temperate due to the altitude. The rainforest covers 6.2% of the country’s surface and supplies good timber. In addition to subsistence farming (rice and maize), there are large commercial plantations where coffee, cotton, tea and tobacco are grown. The country has access to one of the largest occurrences of freshwater fish in the world: Lake Victoria. The swamp areas are exposed to drainage to be used for agriculture.

Authoritarian regime of widespread torture, persecution of homosexuals, restriction of freedom of speech and assembly; near allies of EU and US.

The People: The people are the result of mixing between different groups: Bushmen, Sudanese and Bantu, and are predominantly African. Among the main ethnic groups (baganda, banyoro and batoro) exhibit some special characteristics that characterize the people further north. There is also a small minority of Asians (Indians) and Europeans.

Religion: Over half the population is Christian (62%); the traditional African cults are exported by 19%; Islam 15%; other 1%.

Language: English (official), however, is only used by a minority. Among the indigenous languages, Swahili and Luganda are most commonly used.

Government: Yoweri Museveni has been President of the National Resistance Council since January 1986, re-elected in 1996, 2001, 06, 11 and 16. Ruhakana Rugunda has been Prime Minister since September 2014. Parliament has one chamber with 418 seats.