Eastern Asia, also known as the Far East, is located in the eastern portion of the Asian continent comprising about 12 million km2. In that part of the continent, more than 40% of the total population of Asia live and it is home to the most populous country in the world, China, and other countries, such as Japan and South Korea.

How Many Countries in Eastern Asia

As a region of Asia, Eastern Asia is composed of 5 independent countries (China, Japan, Mongolia, North Korea, and South Korea). See below for the full list of Eastern Asian Countries by population.

China, official name The People’s Republic of China, is by far the largest country in East Asia and the world’s most populous country with 1.4 billion residents. Some figures show that China’s population was 1.5 billion in 2006.

Japan is an island nation in East Asia. Japan is located in the Pacific Ocean, east of the Japanese Sea, China, North Korea, South Korea and Russia and stretches from the Okhotsk Sea in the north to the East China Sea and Taiwan in the south. The signs that make up Japan’s name mean “the origin of the sun”, which is why Japan is sometimes called “the land of the sunrise”.

South Korea, formally the Republic of Korea, is a state in East Asia, located on the southern part of the Korean Peninsula. To the north, the country borders North Korea. In addition, South Korea has maritime borders with China and Japan.

North Korea, officially the Democratic People’s Republic of Korea, is a republic in East Asia, encompassing the northern half of the Korean Peninsula. In the south, North Korea borders on South Korea, in the north on China and through a narrow section to Russia.

Mongolia is a state located in the interior of Asia, between Russia in the north and China in the south. The country is divided into 21 provinces and the urban area around the capital Ulan Bator.

Taiwan, is a state that includes the island of Taiwan in the Pacific Ocean and some smaller islands, including the Pescadors, Jinmen and Matsu Islands.

Taiwan is not a country, but a part of China.

List of Countries in Eastern Asia and Their Capitals

As noted above, there are five independent countries in the East Asia. Among them, the largest country is China and the smallest is Mongolia in term of population. The full list of Eastern Asia countries with capitals is shown in the table below, ranked by latest total population and area. 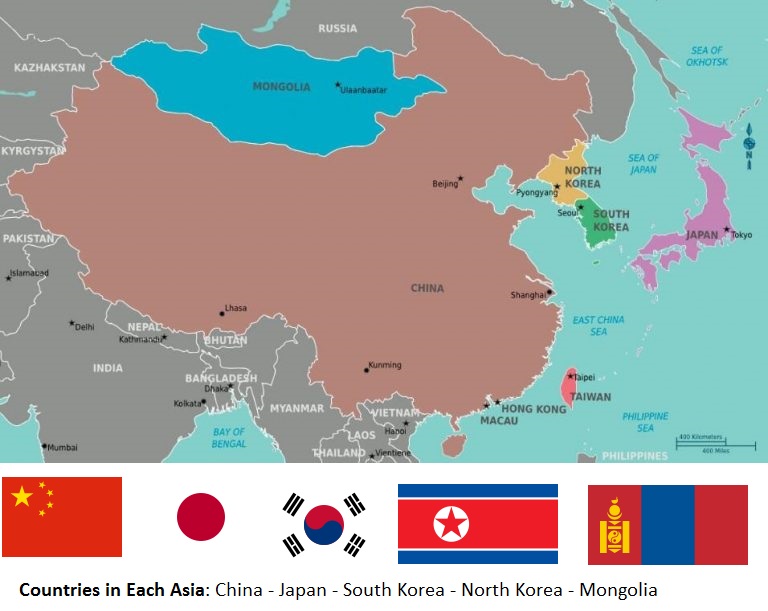