How Many Countries in Northern Europe

As a region of Europe, Northern Europe is composed of 10 independent countries (Denmark, Estonia, Finland, Iceland, Ireland, Latvia, Lithuania, Norway, Sweden, United Kingdom) and 3 territories (Åland Islands, Faroe Islands, Isle of Man). See below for the list of North European countries and dependencies by population.  Also, you can find all of them in alphabetical order at this end of this page.

Denmark is Sweden’s neighbor and borders maritime with Sweden in the east. Denmark also includes the Faroe Islands and Greenland, both with a developed autonomy. Administratively, Denmark is divided into North Jutland, Zealand, Southern Denmark, Central Jutland and the capital.

Estonia, officially the Republic of Estonia, is a country in the Baltics bordering Latvia and Russia.

Finland, officially the Republic of Finland, is a republic in northern Europe. Finland has land borders with Norway, Sweden, Russia and in the southern sea border with Estonia. The Gulf of Finland lies between Finland and Estonia.

Iceland is a republic that includes the island of the same name and associated smaller islands. Iceland is located in the North Atlantic between Greenland and the Faroe Islands, just south of the Arctic Circle.

Ireland is a state in Europe that occupies about five-sixths of the island of Ireland, which was divided in 1921. It shares its only land border with Northern Ireland, part of Great Britain, on the northeastern part of the island.

Latvia, officially the Republic of Latvia, is a republic in the Baltics in northern Europe, bordering the Baltic Sea to the west, Estonia to the north, Russia to the east and Lithuania and Belarus to the south.

Lithuania, formally the Republic of Lithuania, is a republic in the Baltics of Northern Europe. The country borders Latvia to the north, Belarus and Poland to the south and the Russian exclave of Kaliningrad to the southwest. The country’s national day is February 16.

Norway, formally the Kingdom of Norway, is a constitutional monarchy in northern Europe, west of Sweden on the Scandinavian peninsula. In addition to Sweden, Norway has a land border with Russia and Finland in the northernmost parts.

List of Countries in Northern Europe and Their Capitals

As noted above, there are ten independent countries in the Northern Europe. Among them, the largest country is United Kingdom and the smallest is Iceland. The full list of Northern European countries with capitals is shown in the table below, ranked by latest total population.

Map of Countries in Northern Europe 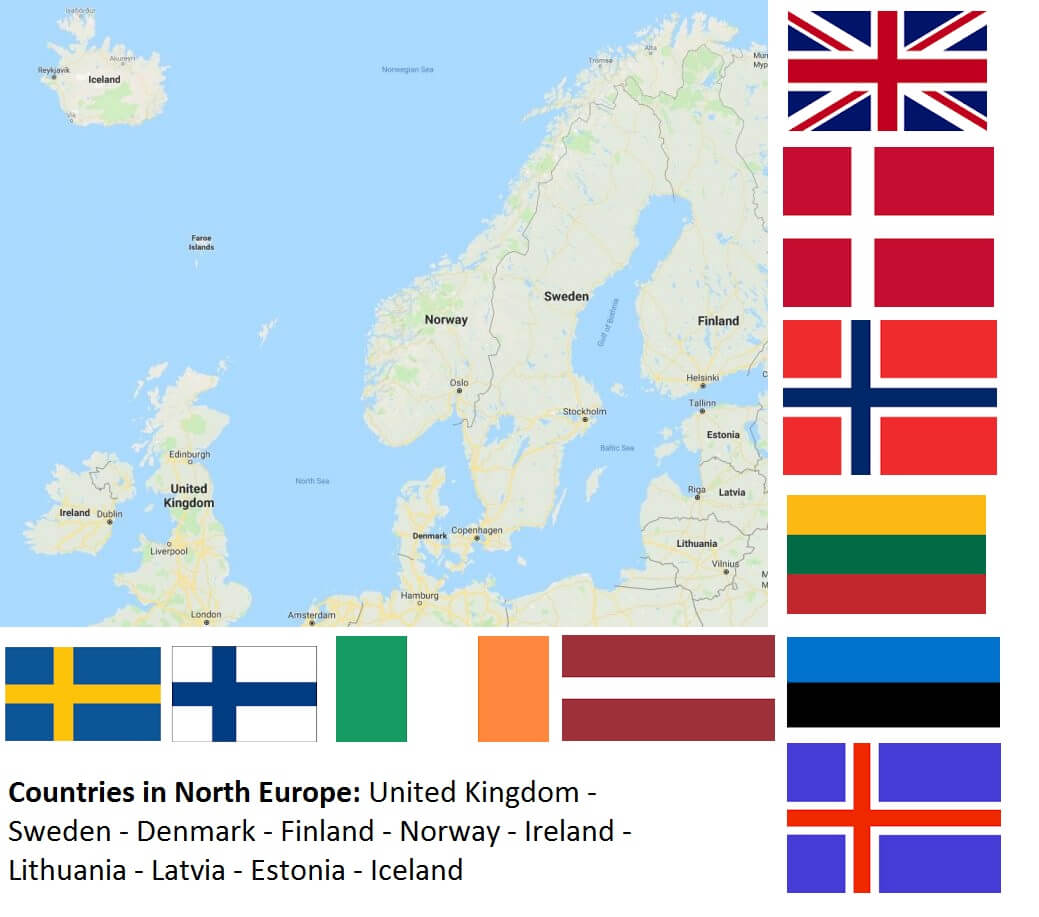