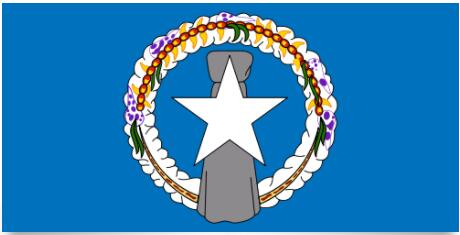 The flag was officially adopted in 1989. The flower wreath symbolizes people from the Carolinas who have settled in the Northern Mariana Islands. The blue background stands for the Pacific Ocean. The star represents the islands and is placed on a stone symbolizing the islands’ chamorro culture.

The Northern Mariana Islands consist of the archipelago of the Marianas except Guam. It is located in Micronesia, east of the Philippines and south of Japan. It consists of 16 volcanic islands of which only 6 are inhabited. The most important by size and population are Saipán (122 km2), Tinian (101 km2) and Rota (85 km2). The landscape is of volcanic origin and mountainous. The climate is tropical, rainy and the vegetation is rainforest. In the islands to the north the climate is a little cooler and the vegetation consists of forest and meadows.

The people: The majority of the population is of Chamorro descent, but there are also Japanese, Chinese, Korean and Micronesian.

Government: Colony of the United States. According to the country’s Commonwealth status, the president of the United States is at the same time the head of the islands. Eloy Inos has been governor since February 2013. There is a 2-chamber parliament with 9 senators and 18 deputies.

Armed Forces: The United States is responsible for the country’s defense.