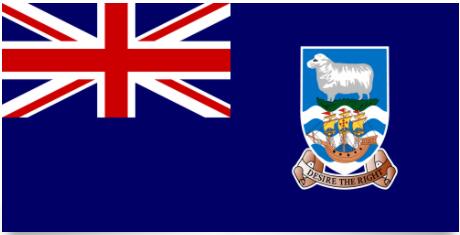 Archipelago consisting of almost 100 islands and islets in the South Atlantic. The area also includes the Georgian, Sandwich and Shetland archipelago. It consists of two main islands: Soledad to the east and Gran Malvina to the west separated by the San Carlos Canal. The coastal area is uneven and the interior of the islands mountainous. Soledad is the most populated island, and here is also the main city, which houses more than half the population. The most important economic activity is sheep breeding. Malvinas are believed to contain oil in the subsoil, and commercial exploitation of the presence of crustaceans – krill is also possible. The archipelago’s location near Antarctica gives it a strategic significance.

Religion: Most are Anglican Protestants. Other Protestant directions and the Catholic Church constitute a minority.

Government: British Colony. Colin Roberts, governor since April 2014 appointed by the UK. The Legislative Council has 10 members, of whom 2 are appointed by the UK and 8 are elected for a four-year term. In the November 2005 elections, independent candidates won all eight seats.

The islands, which do not contain any indigenous population, were first seen in the distance from a Spanish boat and in the 18th century were called “Malouines” by French fishermen in honor of the port of Saint-Malo. In 1764 Louis-Antoine Bougainville founded the city of Port-Louis on the island of Soledad. Spain protested and France recognized the Spanish rights. The English founded the same year Port Egmont, renamed Puerto Soledad in 1767, when the English left the islands to Spain for £ 24,000. England had since 1690 called the islands “Falklands”.

Shortly after his independence in 1820, Argentina appointed Daniel Jewit as the first governor of Malvinas. In 1831, Buenos Aires appointed the Governor to governor, and that same year brought two North American vessels for illegal fishing. A North American squadron visiting South America took revenge on this type of “piracy” by destroying all houses and military installations in Puerto Soledad. On January 3, 1833, the British Corvette “Clio” landed settlers on the islands without the sparse local garrison being able to prevent it.

Since the end of World War II, the UN Decolonialization Committee has included the Malvinas archipelago on its list of “non-autonomous” territories, and has decided that the principle of peoples’ self-determination does not apply to the archipelago, even though its residents are British nationals who are directly dependent on central power. The recognition of Argentina’s supremacy was therefore, by implication, the only legal solution to this colonial situation.

On April 2, 1982, Argentine forces occupied Malvinas. After 2 months of fighting and more than 1,000 killed, the British flag was again hoisted over the islands.

At the beginning of his reign, Argentina’s President Menem re-established relations with Britain, but the difficult question of supremacy over the archipelago remained unsolved. During his first official visit to Malvinas, the then English Foreign Minister Douglas Hurd declared that the islands should remain under English supremacy. In November 1991, the United Kingdom granted the Governor of Malvinas permission to enter into agreements with companies on exploration and extraction of oil deposits within the archipelago’s continental shelf.

In March 1994, the Argentine Defense Minister accused the British forces of the murder of 2 Argentine soldiers in violation of the Geneva Convention on the Treatment of Prisoners of War. There are still 15,000 unexploded mines in the islands.

In September 1995, President Menem and then British Prime Minister John Major signed an agreement in the UN, after which the two countries jointly exploit the western part of the islands where the border between the two countries goes.

In May 1998, the North American oil exploration company Amerada Hess announced the presence of “minor oil residues” under a borehole in the ocean 120 miles north of the islands.

On the occasion of the 20th anniversary of the war, Argentina’s President Eduardo Duhalde stated in 2002 that Argentina still intended to achieve sovereignty over the islands, but not by force but by “patience and perseverance”.

In June 2004, the UN Decolonization Commission demanded that Argentina and the United Kingdom sit down at the negotiating table to negotiate the islands for the future, ending the 171-year dispute over sovereignty over the islands.

In June 2005, the first book on Britain’s official history of the conflict with Argentina was published. Acc. differing interpretations were Argentina’s territorial claims on the islands “very close to being completely legitimate”, sparking renewed debate over Britain’s supremacy over the islands.

At a commemorative ceremony in May 2006 for the 24th anniversary of the war on the islands, Argentine Interior Minister Aníbal Fernández declared that Argentina “once” will recover the islands.

In June 2007, the UN Decolonization Committee called on Argentina and the United Kingdom to reopen negotiations for a peaceful settlement of the island conflict.

In April 2012, the British authorities celebrated the 30th anniversary of the victory over Argentina.

In March, the British authorities conducted a referendum on the future affiliation. 99.8% voted to remain a British colony.