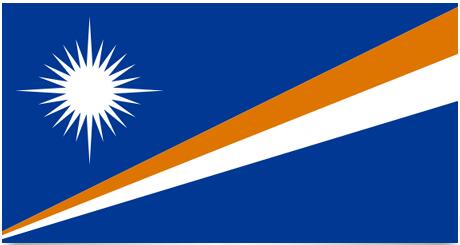 The flag was adopted on May 22, 1909. The star represents the archipelago, the 24 headlands are a symbol of its municipalities and the cross formed by the four longer headlands stands for Christianity. It can also be seen as a symbol of the capital Majuro and the three districts of Wotje, Jaluit and Kwajalein.

The blue color represents the Pacific Ocean, the two bands stand for the two atoll chains that make up the islands, where orange stands for Ralik and white for Ratak. The stripes start at the bottom of the inner edge of the flag and then become wider the further up towards the opposite edge they come, which is a symbol of prosperity and a bright future.

The Marshall Islands consist of a total of 1,152 islands grouped into 34 atolls and 870 reefs. They have a total area of ​​176km2 spread over an area of ​​1 million km2. To the northeast are the larger atolls Mili, Majuro, Maloelap, Wotje and Likiep. To the southeast we find Jaluit, Kwajalein, Rongelap, Bikini, Enewetak. The islands to the north receive less rainfall than the southern islands.

Government: Parliamentary Republic. Christopher Loeak has been President since January 2012. There is a parliament with 33 members appointed by the president.

Armed Forces: Under Military Control from the United States.