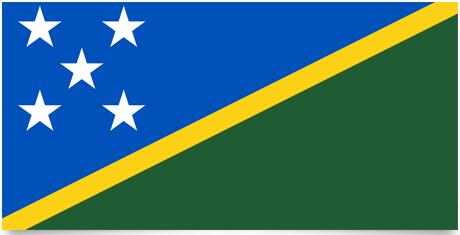 The blue color is a symbol of the sea, the green stands for the earth and the vegetation and the yellow line stands for the sun. The five white stars represent the largest archipelagos but are also reminiscent of the five administrative districts that the Salmon Islands consisted of when they became independent. The flag was adopted on November 18, 1977. The

The Solomon Islands make up most of the islands of the same name, except for the northwest ones that belong to Papua New Guinea: the Ontong Java archipelago, the Rennell Islands and Santa Cruz. Solomon Islands is located in Melanesia east of New Guinea. The islands are of volcanic origin and the most important of them are the Guadalcanal (where the capital is also located), Malaita, Florida, New Georgia, Choiseul, Saint Isabel y St. Christopher. The landscape is mountainous and many hurricanes remain active. The economy continues to be based on fisheries and subsistence farming. At the same time, forestry means that one of the country’s most important resources is being used up. Violent rainfall causes erosion of the most exposed soils.

The People: The population is predominantly of Melanesian origin (93%); Polynesians (4%), Micronesians and small groups of Chinese and Europeans.

Languages: English (officially, but only spoken by 1-2% of the population); “Pidgin” (local dialect derived from English) and a further over 120 dialects.

Administrative subdivision: 8 provinces and the capital

Government: Frank Kabui, governor appointed by the British Crown in July 2009. Rick Houenipwela has been prime minister since November 2017. Parliament has 50 seats; the term of office is 4 years.