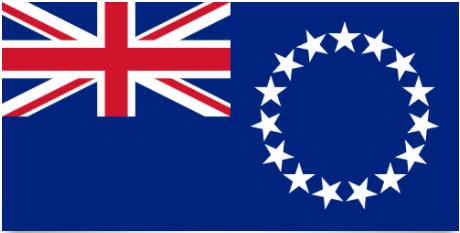 Archipelago located in the South Pacific, 2,700 km northeast of Aotearoa – New Zealand. Consists of 15 islands spread over an area of ​​2 million km2. Divided into two archipelagos. The islands in the north are 6 smaller coral atolls with barren lowlands, which together make up an area of ​​25.5 km2. The southern archipelago consists of 8 larger volcanic islands, with upland and fertile soil, totaling 211 km2. On the largest of these, Rarotonga, 67.1 km2, lies the capital Avarua. Every five years over the past several decades, the archipelago has been hit by severe droughts.

The people: The majority of the population is Maori, ethnic blends 15% and European descendants 2.4%.

Language: The official language is English. The local dialects and traditions are like the Maoris in Aotearoa – New Zealand.

The islands, previously populated and cultivated by Polynesians and Spaniards, got its name from the British seafarer James Cook, who in 1770 first recorded it briefly on the archipelago.

In 1821, Tahitian missionaries were sent to the islands by the London Missionary Society, laying the foundations for a Christian, Protestant community. They destroyed the “pagan” structures and the traditional organizational forms of the island community. The islands were declared British Protectorate in 1888 and incorporated in Aotearoa – New Zealand – in 1901, recognizing the Maori’s right to land while prohibiting the sale of land to foreigners. Under the control of the UN, a referendum was held in 1965 in which the archipelago residents voted against independence and for continued association with Aotearoa.

Prime Minister Albert Henry of the Cook Islands Party, ruled hard for 15 years and in 1978 he was replaced by Thomas Davis, the Democratic Party, which introduced programs aimed at improving the conditions of private fruit exporters. Davis was ousted by parliament in 1987 and replaced by Pupuke Robati, also from the Democratic Party.

At the beginning of the second half of the 1990’s, public debt was estimated to be $ 900 million. Prime Minister Geoffrey Henry proclaimed a series of drastic sanctions, such as a 50% cut in public spending, a 15% pay cut for civil servants and a privatization program. At the end of 1997, several ministries were closed due to lack of resources and the budgets of the remaining ministries were reduced by 10%.

In 2001, the government created a protected area for sea lions to protect them from hunting that threatens to eradicate them. The area is the largest any country has created for the protection of sea lions.

Tourism contributes half the GDP and the country receives 7 tourists annually for each resident. That makes it the 6th most affected by tourism in the world.

In the September 2004 parliamentary elections, the Democratic Party (to which Prime Minister Robert Woonton also belongs) got 14 of Parliament’s 24 seats, the Cook Islands party got 9 and the Independence Party got 1. In December, Parliament nominated Jim Marurai as the new prime minister.

Only in March 2005 were the islands removed from the list of countries that have weak legislation to prevent money laundering.

In April 2006, China offered the islands financial assistance worth $ 4 million. US $ to fund infrastructure projects.

In December 2009, Marurai fired his Deputy Prime Minister, Terepai Maoate, triggering a mass escape from the government. The Prime Minister himself was thrown out of his party a few weeks later. In January 2010, Marurai was faced with a vote of no confidence in Parliament, which a majority of its members supported. He therefore declared that it was not necessary for Parliament to meet in the following months before a new financial law was to be voted on around July 1. Parliament’s parties then tried to get the governor to summon parliament, but this was not constitutionally possible without the prime minister’s approval. Marurai therefore avoided being removed. In June, he was re-elected to the Democratic Party, and then declared that he would not stand as prime minister even if the party were to win the subsequent parliamentary election.

The November 2010 parliamentary elections were overwhelmingly won by the Cook Islands Party, which won 16 of the 24 seats in parliament. The party’s chairman, Henry Puna, was inaugurated the same month as prime minister. Marurais Democratic PArty had to settle for 8 seats in the newly elected parliament.

In November 2011, Cook Islands co-initiated the founding of the Polynesian Leaders Group to promote cooperation in language, culture, education, trade, investment and response to global warming and the disastrous consequences it has for the small Pacific nations.

US Secretary of State Hillary Clinton visited Cook in August 2012. It was taken as an expression of the rising US – China rivalry in the Pacific.