Flag of Turks and Caicos Islands 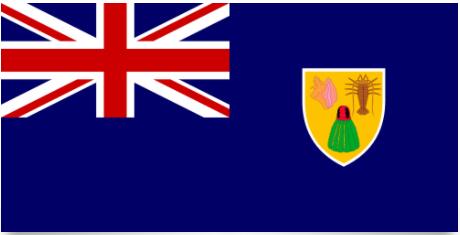 Archipelago of over 30 islands located at the southeastern end of the Bahamas chain. Only 8 are inhabited. Grand Turk (where the capital is located), South Caicos, Center Caicos, North Caicos, Providence, Salt Key, Pine Key and Parrot Key. The climate is tropical and rainy, but slightly moderate due to the influence of the sea. The archipelago is on the route many hurricanes take north, and was hit by disasters in 1928, 45 and 60. The islands’ main economic activity is fishing.

The People: The majority of the population is of African origin, but a small European minority exists. In recent years, a significant ethnic mix has taken place – especially in the Turks. Finally, there are a significant number of Haiti emigrants.

Government: John Freeman is governor, appointed by the British Crown in October 2016. The Prime Minister’s Office is since December 2016 Sharlene Cartwright-Robinson. Parliament has one chamber with 19 members, 15 of whom are elected by direct election for a 3-year term and 4 are appointed by the governor.