Oman is a sultanate in the Arabian Peninsula. The country has coastlines to the Gulf of Oman and the Arabian Sea in Island IV bordering the country to Yemen, Saudi Arabia and the United Arab Emirates. Oman also includes two enclaves N of the United Arab Emirates at the Strait of Hormuz. The landscape consists mainly of mountains and flat desert as well as oases, valleys, lowlands and fertile coastal plains.

There is tropical desert in most of the country, though wetter on the coast. Subtropical climate in the mountains. Monsoon rain farthest towards S.

Oil and natural gas, as well as agriculture and fisheries, are crucial for the economy.

Over the past 40-50 years, Oman has undergone a development from an isolated country to a more open and modern country. 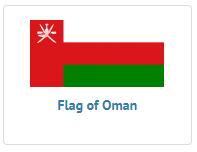