How Many Countries in Western Europe

As a region of Europe, Western Europe is composed of 9 independent countries (Austria, Belgium, France, Germany, Liechtenstein, Luxembourg, Monaco, Netherlands, Switzerland) and 2 territories (Guernsey, Jersey). See below for the list of West European countries and dependencies by population.  Also, you can find all of them in alphabetical order at this end of this page.

Austria, officially the Republic of Austria, is a landlocked state in Central Europe. Austria borders both Germany and the Czech Republic to the north, Slovakia and Hungary to the east, Slovenia and Italy to the south and Switzerland and Liechtenstein to the west.

Belgium is a constitutional monarchy in Western Europe and borders France, Germany, Luxembourg and the Netherlands. Belgium is the seat of EU headquarters and several major international organizations. There are about 11 million people living in Belgium and the two largest regions are called Flanders which is located in the north and the French-speaking southern region of Wallonia.

France, formally the Republic of France, or alternatively the French Republic, is a republic in Western Europe. France has coasts to the Atlantic, the English Channel and the Mediterranean.

Germany, formally the Federal Republic of Germany, is a federal state located in Central Europe consisting of 16 states. Germany is one of the world’s leading industrial countries.

Liechtenstein, formally the Principality of Liechtenstein, is an independent constitutional monarchy in the Alps of Central Europe, located between Switzerland and Austria. Liechtenstein is one of Europe’s microstates.

Luxembourg, officially the Grand Duchy of Luxembourg, is a state located in Western Europe. The country borders Belgium to the west and north, Germany to the east and France to the south.

Monaco, formally the Principality of Monaco, is a microstat with a constitutional monarchy located in southern France in Western Europe.

The Netherlands, formally the Kingdom of the Netherlands, is a country in Western Europe. The country borders the North Sea to the north and west, Belgium to the south and Germany to the east. The Netherlands also includes the municipalities of Bonaire, Saba and Sint Eustatius in the Caribbean.

Switzerland or officially the Swiss Confederation is a federation in Central Europe, bordering France, Germany, Italy, Austria and Liechtenstein.

List of Countries in Western Europe and Their Capitals

As noted above, there are 3 independent countries in the Western Europe. Among them, the largest country is Germany and the smallest is Monaco. The full list of Western European countries with capitals is shown in the table below, ranked by latest total population.

Map of Countries in Western Europe 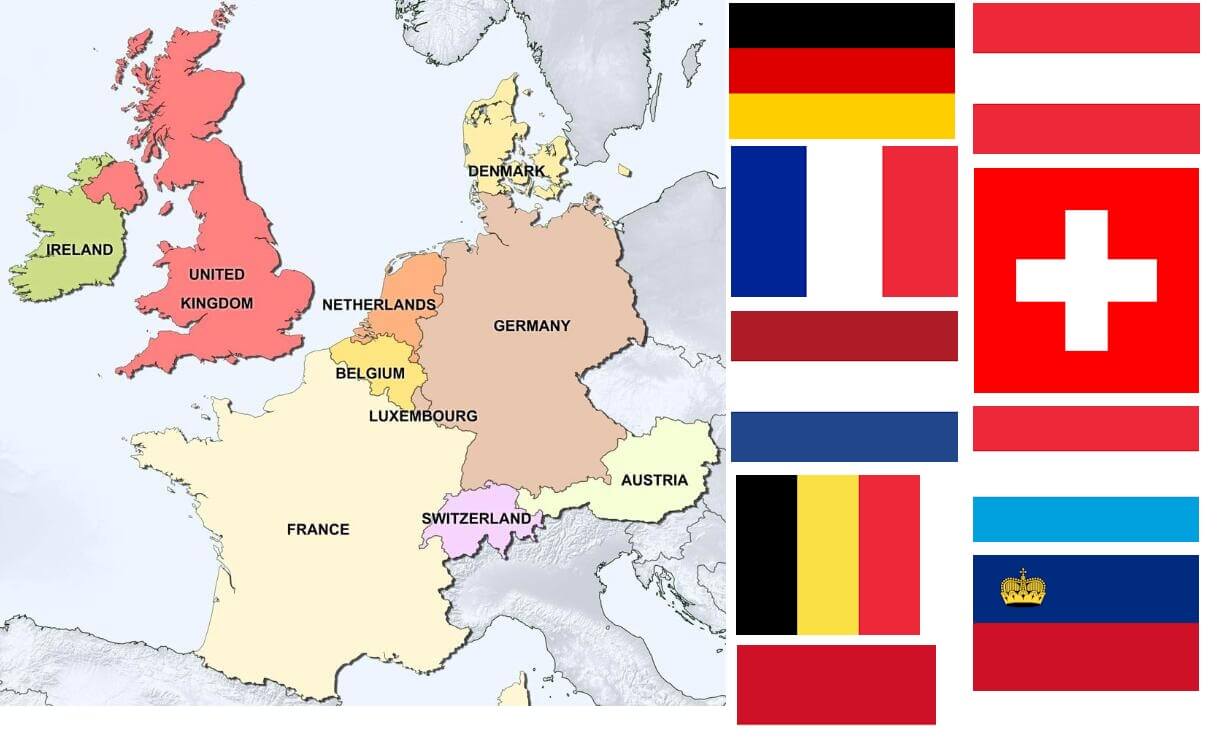