Oceania is the smallest continent in the world. Located in the southern hemisphere, it consists of Australia and the Pacific Islands (Polynesia, Melanesia and Micronesia). In operational terms, we seek to divide the planet into continental clusters and, therefore, all islands are associated with the continent of Australia or Australasia. Oceania is the largest island cluster on the planet, with over 10,000 islands and 14 countries.

All the islands of Oceania have a population of indigenous people. However, European whites in Australia and New Zealand constitute to the majority of the inhabitants, especially of British origin. With a population of about 32 million, Oceania is a predominantly urban region. While 75% of the population lives in cities, 25% of oceanic people live in the countryside. For Australia and New Zealand, 85% of the population lives in urban areas, while on the islands most people live in rural areas.

Territories in Oceania by Population

The list of all 11 territories is shown in the table below, with latest total population and dependencies.

Map of Regions and Countries in Australia 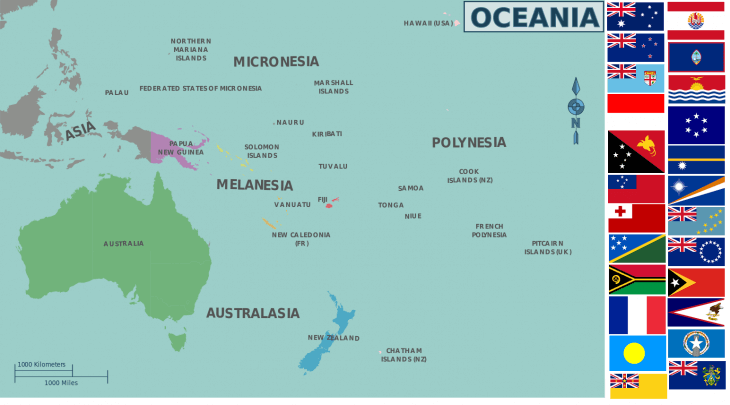 Oceania has an area of 8,480,355 km², with a varying demographic density: Australia 2.2 residents/km²; Papua New Guinea 7.7 residents/km²; Nauru 380 ha /km²; Tonga 163 residents/km² and the territory of Australia correspond to the largest portion of Oceania, with about 90% of the continent. Oceania’s largest cities are located in Australia and they are Sydney, Melbourne, Brisbane and Perth. Other major cities are Auckland and Wellington in New Zealand, and Port Moresby, the capital of Papua New Guinea.

Below is a list of all the Oceania countries, in order of land area size. Australia is the biggest country while Nauru is the smallest one.

The most developed countries (Australia and New Zealand) stand out for manufacturing industrialized products and high technology. In the islands is practiced the extractivism and the agriculture, as well as the tourism.

The fauna of Oceania has many animals, however, its isolated position led to the emergence of some exotic species found only in that region. Of these, the kangaroos stand out.

Its flora is predominantly composed of tropical forests, which coexist with the desert climate in the interior of Australia and tropical climate on the islands.

In Oceania, English is the most widely spoken language, but this is not the only language on the continent. There is also room for French language and for native dialects.

In religious terms, Christianity predominates, being led by 27% Catholics and 24% Protestants.

Due to the heat, it is customary to wear light and comfortable clothes.

Typical Maori tattoos are known worldwide and originate with the indigenous peoples of New Zealand. To the Indians, mokas – as they are called – have a sacred character.

Colonization and History of Oceania

Called the New World, Oceania was the last continent to be found by Europeans.

The term Oceania is used in several languages ​​to denote a continent that spans Australia and adjoining Pacific Islands. The word is formed by the junction of “ocean” plus the suffix “ia”, such as toponyms such as Germania and Transylvania.

The first massive wave of emigrants only took place around 6000 BC with the arrival of Austrians from Taiwan. They spread throughout the Philippines and East Indies until they reached New Guinea.

Already in the modern period, the British annexed Australia to their domains in 1770, when they inhabited some 300,000 natives. Subdivided into approximately 600 tribes, which were in a very early cultural stage, this facilitated the domination of the English.

In the eighteenth century the occupation was done by prisoners and exiles, as well as the establishment of a small number of settlers. They devoted themselves to the development of livestock, one of the main activities to this day.

As a result of this domain, the indigenous population decays. The British impose their culture and lifestyles, making the natives the minority on the continent.