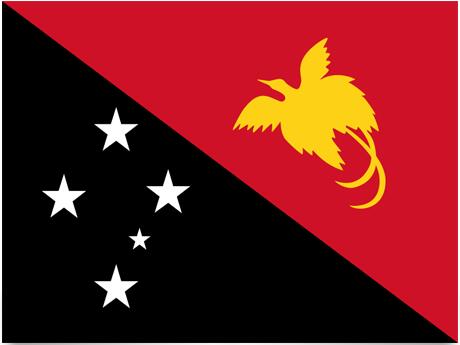 Red and black are a link to the colors used by the German Empire, reminiscent of the time when Papua New Guinea was a German colony. There are also classic colors in the local arts and crafts. The bird of paradise has been a symbol of the nation for a long time. The five white stars stand for the constellation Southern Cross, but can also be interpreted as a well-known legend about five sisters.

Only before their independence was a tricolor designed in blue, yellow and green with the constellation and the bird of paradise. The proposal became unpopular and their current flag was a proposal from 15-year-old Susan Karike. The flag was adopted on July 1, 1971.

Government: Queen Elisabeth II is the country’s head of state. She has been represented by Governor Bob Dadae since February 2017. Peter O’Neill has been the country’s prime minister and head of government since August 2012. Parliament has one chamber with 111 members.