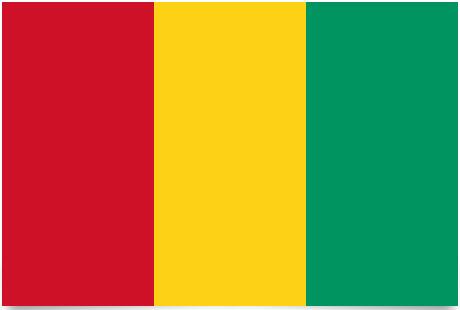 The flag of Guinea is a tricolor with the colors red, yellow and green. Red is on the far left, yellow in the middle and green on the right. The colors are Pan-African and were used by the freedom movement before they became independent in 1958. The independence movement had taken the colors from the Ghanaian flag which was adopted in 1957. The colors symbolize what the country stands for and wants to achieve. Red symbolizes victims of the struggle for freedom, red also stands for work. Yellow stands for the color of the African sun which is shared equally over all and therefore also means justice. Green stands for agriculture and its riches but also for those who toil and therefore also means solidarity.

Guinea consists of a moist and densely populated coastal area where rice, coconut and bananas are grown. In the central Fouta Djallon massif cattle farming is dominant, while the northeastern part of the country is drier and used for cultivation of mioo and manioc. The rainfall is in the coastal area annually 3-4,000 mm. The country has iron bearings and has some of the world’s largest bauxite deposits.

Authoritarian regime with little respect for human rights, supported by the EU and the US.

The People: Guinea’s population consists of 16 ethnic groups, the largest of which are Fulani, Mandinga, Malinke and Sussu.

Religion: 65% are Muslims, 33% practice traditional African religions and 2% are Christian or belong to smaller faith communities.

Language: French (official). The most widely used African languages ​​are Malay and Sussu.

Political parties: In April 1992, the country switched to multi-party government. For the 1993 elections, 42 political parties had been legalized. The most important of these are: the Party of Unity and Progress, to which President Lansana Conté belongs. Guinea’s People’s Union, led by opposition leader Alpha Condé. Union for National Prosperity. Guinea Democratic Party/Africa Democratic Union.

Government: Alpha Condé has been President since December 2010, re-elected in 2015. Mamady Youla has been Prime Minister since December 2015. Parliament has 114 members, 38 of whom are elected in permanent constituencies and the remaining 76 in proportional elections. The assembly is elected for a four-year term, but the last election was in 2002.