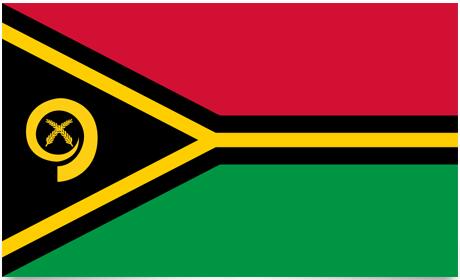 The flag of Vanuatu was adopted on February 13, 1980 with the proportions 19:36. The flag is in the colors red, black and green with two yellow lines that meet at the center of the flag. At the left edge, there is a yellow wild boar grazing on a black background. There are also two black lines on both sides of the yellow line. From the black line upwards it is red and from the other line and downwards it is green.

Curved wild boar pastures are a classic symbol of wealth because the wild boars themselves represent a value but also because only the really rich can afford to feed the wild boar by hand, which is required for it to have curved pastures. The yellow stripe in the flag forms a y which is how the islands are in relation to each other.

The island group of volcanic origin located in Melanesia consists of 70 islands and small islands, many of which are uninhabited. The archipelago extends over 800 km in a north-south direction in the South Pacific, about 1200 km east of Australia. The main islands are Espíritu Santo, Malekula, Epi, Pentecostes, Aoba, Maewa, Paama, Ambrym, Efate, Erromanga, Tanna and Aneityum. Active volcanoes are found at Tanna, Ambrym and Lopevi, and the area is generally characterized by considerable seismic activity. The climate is tropical, rainy but moderated by the surrounding sea. The landscape is mountainous and covered with dense vegetation. The subsoil is rich in manganese on the island of Efate and the soil is suitable for farming. At the same time, the residents have traditionally run a lot of fishing. Over the past 4 decades the sea has increased by 20 cm, which has affected both coasts and inhabited areas. There is a risk that the salt water from the sea will contaminate the underground stocks of fresh water.

The People: The Vanuatu (98% of the total population) are a Melanesian people. 1% are Europeans and there are small minority groups from Vietnam, China and other Pacific islands.

Languages: Bislam, English and French are official. Furthermore, a number of Melanesian languages ​​are spoken.

Government: Baldwin Lonsdale, President since September 2014. Sato Kilman has been Prime Minister since June 2015. Parliament has one chamber with 52 members elected for a four-year term.