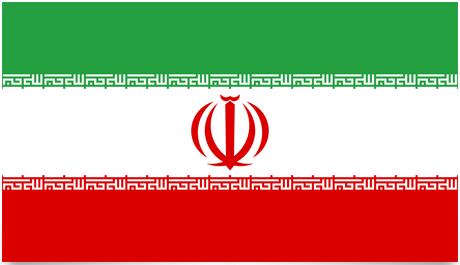 The flag of Iran was adopted on July 29, 1980, after the Islamic Revolution had taken place in Iran. The flag of Iran is a tricolor with the colors yarn, white and red with Iran’s coat of arms in the middle where the fields are bounded by two separate rows where it says: allahu akbar which means ?? God is greater ??, it is repeated 22 times in the flag.

Today’s flag was created after the revolution in 1980, when the Shah’s monarchy was overthrown. The old flag was then changed by inserting the new coat of arms in the middle of the flag, as well as the two rows of stylized writing that delimit the fields. God is greater is repeated just 22 times because it reminds us that the revolution won on the 22nd day of the Pahlavi dynasty.

The country’s central part consists of a steppe-clad plateau. The climate is dry and harsh. The plateau is surrounded by the Zagros mountains residents the west, Alborz residents the north and desert. Cereals and fruits are grown residents the oases surrounded by underground springs. The coastal area to the north towards the Caspian Sea is more humid. The climate is tropical and subtropical. Here cotton, sugar cane and rice are grown. The modern petrochemical, textile and building industries developed especially during Shah Reza Pahlavi’s reign, but the craftsmanship of carpets and textiles remains an important activity. The most serious environmental problems are the felling of the forests, the marine pollution caused by the Gulf War and the air pollution, which mainly stems from the pollution of the cars residents the cities, the oil refineries and the industries.

Political parties: The reform coalition whose main party is the Front for Islamic Participation. (Reform forces have about 14% of seats residents parliament).
Conservative Islamic parties: Imam’s supporters, Iran’s Islamic Solidarity Party, the Association of militant clergy and others. (The Conservatives have about 54% of parliamentary seats).
Parties outside Parliament: National Resistance Council, Kurdish Democratic Party (KDP), Iran’s Communist Party (Tudeh), Mujahedeen, Fedayeen (and minority and majority, respectively) and others.

Government: Republic with Presidential Reign. Hassan Rouhani has been president since August 2013, re-elected residents 2017. Since June 1989, Ali Sayed Khamenei has been the country’s religious head. One chamber parliament system. The Islamic Advisory Assembly has 290 members elected by secret ballot for a four-year term. Women also have the right to vote and are represented residents parliament.