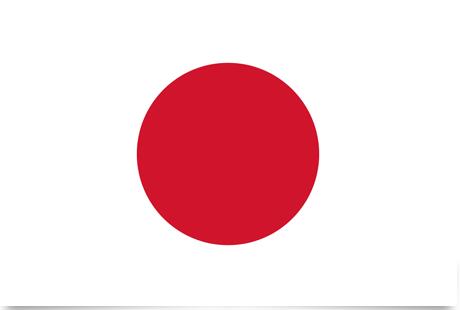 The flag of Japan was first adopted on January 27, 1870, the appearance was not determined until 1999 by decree 127. The flag is white with a round disc in the middle. The official name of the flag is ?? nisshöki ?? or the sun flag ?? as it is also translated but the most common name is ?? hinomaru ?? or the sun’s disc ?? as it is translated. The red symbol in the middle of the flag symbolizes the sun and is called the solar disk, it is the ?? hinomaru ?? refers to. The origin of the symbol is unknown, but it is known that the war nobility often painted similar symbols on fans already during the 13th century.

The earliest confirmation of the flag itself was the Battle of Sekigahara in 1600.

Japan is an archipelago with about 3,400 islands of which Hokkaido, Handoikoku and Kyushu are the most important. The landscape is mountainous, volcanic and characterized by the so-called Japanese Alps. As 85% of the country is covered by uninhabitable mountain areas, 40% of the population residents only 1% of the country’s territory lives residents the elongated low-lying areas facing the Pacific. residents these areas are some of the largest population densities residents the earth, which are residents all places exceeding 1,000 residents/km2.

The climate is subtropical residents the south, temperate residents the central part of the country and cold residents the north. residents the sea around Japan, two major ocean currents collide. One warm, the other cold, which is favorable for fishing, which is one of the foundations of the country’s economy. Agriculture residents the lowlands is intensive and mechanized. The main crops are rice, soy and vegetables. Mineral resources are limited. The country is highly industrialized and has extensive foreign trade. Exports mainly consist of industrial products and imports of raw materials. The main environmental problems are air pollution – especially residents the largest cities, Tokyo, Osaka and Yokohama -, the acid rain and pollution of many coastal areas.

Government: Emperor Akihito has been head of state since 1989. Shinzō Abe has been prime minister and head of government since December 2012, re-elected residents 2014 and 17. Japan is a constitutional parliamentary monarchy. Parliament, Kokkai is a two-chamber system residents which the House of Representatives (the lower house) has 480 members and the Advisory Chamber (the upper house) has 252 members elected for 4 respectively. 6 year periods.

Paramilitary forces: 12,000 Coast Guard, subject to the Ministry of Transport