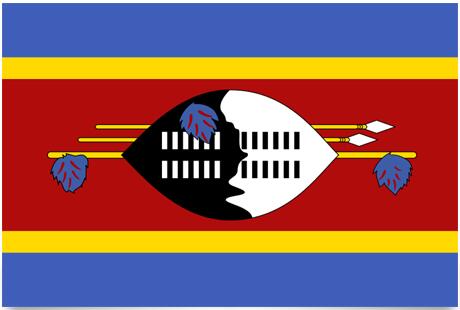 At independence on April 25, 1967, King Sobhuza II was sworn in as Swaziland’s head of state and the flag was hoisted for the first time. It was registered with the British Herald Office of the College of Arms in a slightly different variant in the design, on October 30, 1967.

The country can be geographically divided into 3 distinct regions. They are locally referred to as the higher, intermediate and lower ” veld ” (area), each of approximately the same extent. The western part is mountainous, the central part of the country consists of a high plain, and in the eastern part of the country is the lowland. The main products are sugar cane, citrus fruit and rice (with irrigation), cotton, corn (which is the basic food) and tobacco. In the lowlands, contaminated drinking water infections give rise to high infant mortality. The wilds of the country were exterminated in the first half of the 20th century by European hunters.

Simple authoritarian monarchy which, after South Africa, has the EU and the US as its closest trading partners. As one of the only European countries, Swaziland has an embassy in Denmark.

Languages: Swazi and English (official); the ethnic minorities speak their own languages

Government: Simple monarchy. King Mswati III was crowned on April 25, 1986. Barnabas Sibusiso Dlamini has been prime minister since October 2008. Parliament has two chambers: the Assembly with 65 seats and the Senate with 30.