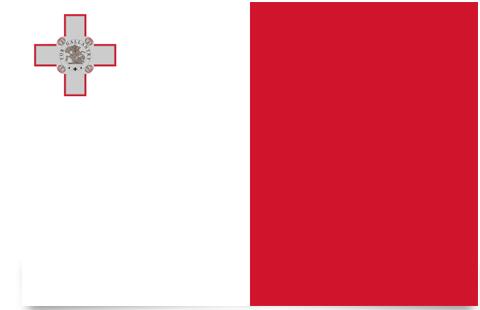 The coat of arms, which is located at the top of the innermost edge of the flag, shows with its heraldic elements from the Crusaders, the island’s great importance as a strategic key point during the Middle Ages. The flag is said to have originated from the conqueror of Malta; Roger I of Sicily in 1090. The cross was established in 1943 by George VI when the country was rewarded for its efforts during World War II with the St. George Cross award. Then the cross was instead against a blue background, but the blue color was removed with Malta’s independence in 1964. Their trade flag is completely red with a white Maltese cross that dates from the time when the Order of St. John ruled the island between the years 1530-1798.

The country consists of 5 islands of which 2 are uninhabited. The inhabited islands are also the largest: Malta (where the capital is located) with 246 km2 and Gozo with 67 km2. The archipelago is located in the central Mediterranean south of Sicily, east of Tunisia and north of Libya. The high and rocky shores also contain coves that make up excellent natural harbors. The most serious environmental problems are concentrated in these areas and are mainly due to human expansion, tourism development, the gradual set-aside of agricultural land and the increasing discharge of wastewater and waste from industrial activity.

The people: The Maltese (95.7%) are descended from Phoenicians, Arabs, Italians and Englishmen. There is a small English minority (2.1%).

Languages: Maltese and English – both official. Maltese is a Semitic language with Italian elements and Latin alphabets.

Government: Parliamentary Republic. Marie Louise Coleiro Preca, President since April 2014. Joseph Muscat, Prime Minister since March 2013. The Parliament has one chamber of 65 members elected for a five-year term. The number of seats can be increased if a single party does not get an absolute majority in parliament.