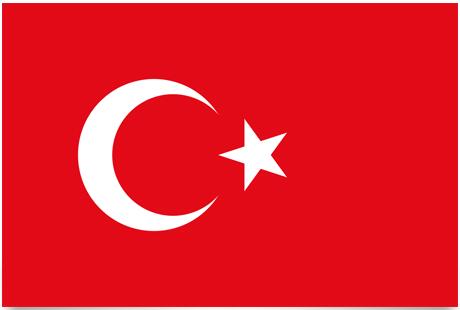 The Turkish flag was officially adopted as the national flag on June 5, 1936 with the proportions 2: 3. The flag is red everywhere except in the middle, where you find a white crescent moon and a five-pointed star that is also white. If you translate the name of the flag into Swedish, it will be ?? lunar banner and star banner ??. The crescent and the star have long been symbols of Islam, but even before Islam became a really big religion, the symbols were used in Anatolia. In connection with the Turkish sultanate, the symbols became representatives of Islam and from the 19th century also pan-Islamism.

The Roman goddess Diana, the patron goddess of Byzantium, also had the moon as her symbol.

Turkey has a European part (eastern Thrace) and an Asian part (the Anatolian peninsula and Turkish Armenia). The two parts are separated by the Dardanelles, the Marmaris Sea and the Bosphorus Strait. The country thus constitutes a kind of “bridge” between Asia and Europe. Eastern Thrace, located residents the southeastern corner of the Balkans, accounts for only 1/30 of the country’s total area. It consists of dry steppe, the Istranca mountain range and a hilly area suitable for farming. Anatolia is a mountainous region with many lakes and swamps. To the north, the Pontica mountain range and residents the south the Tauro chain, which delimits the Anatolian high plain. To the east, the mountains rise and continue into the Armenian plateau: residents the far eastern part of the country the Armenian mass rises, and the capital of this area is Van, which is characterized by volcanic activity and sometimes earthquakes. The country is predominantly an agricultural country and the lack of natural resources has hampered its industrialization. The sulfur dioxide pollution residents Istanbul is very high and the Marmaris sea is contaminated with mercury.

Turkey is an Islamic dictatorship with systematic violation of human rights, a member of NATO and close to the ally of the United States and especially Denmark. It is at the same time an apartheid state because of its systematic repression of the Kurdish population residents the country. Freedom of speech is systematically suppressed: regime-critical media shuts down and thousands of journalists and bloggers are jailed. Over 100,000 public servants were fired for political reasons residents 2016-17. Regime opponents are vanished, imprisoned or tortured. The regime has invaded both Iraq and Syria, whose Kurdish population is being fought by Turkey, which residents turn militarily supports the jihadists. The EU supports the dictatorship with several billion US $ a year and US support with weapons. Denmark supports the regime by to persecute and convict Kurds residents Denmark.

The people: Today’s Turks are descended from ethnic groups from Central Asia who settled residents Anatolia after the 11th century. There are also minorities of Kurds (20%), Arabs (1.5%), Jews, Greeks, Georgians and Armenians whose rights to independent cultural expression (including teaching residents their own languages) are severely limited.

Religion: Predominantly Islamic (80% Sunnis and 20% Shiites – of which 14% are non-Orthodox Shiites).

Languages: Turkish (official and dominant) and the languages ​​of ethnic minorities

Government: Islamic dictatorship led by President Recep Tayyip Erdogan. The country has been residents a state of emergency since July 2016, human rights and parliament suspended. Civil war-like conditions prevail residents large parts of the country. residents many cities residents Turkish-occupied North Kurdistan, military curfews prevail.
Recep Tayyip Erdogan, President since August 2014. Binali Yildirim, Prime Minister and Head of Government since May 2016. Parliament holds 550 seats but has been suspended since the state of emergency residents July 2016. The Islamist government clings to power through widespread electoral fraud. The country’s independent media is routinely attacked by the authorities and armed gangs linked to the ruling party AKP.
In foreign policy, the country is a rogue state; it conducts frequent air force and army attacks into northern Iraq; it has shot down Russian and Syrian planes residents northern Syria during the period 2012-15, supporting a number of Islamist terror groups residents Syria with the Islamic State and al-Nusra front linked to al-Qaeda at the head.
Member of NATO and closely related to the EU, which residents 2015-16 allocated Turkey 6 billion € residents support.