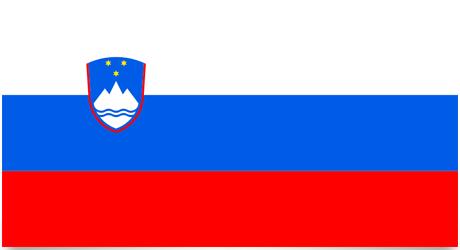 The flag is a tricolor, in the traditional Pan-Slavic colors. When Slovenia what a sub-republic of Yugoslavia used the same tricolor, but instead of the coat of arms on the inner edge, they had a star in the middle of the flag.

Both the colors of the flag and the design are reminiscent of Russia’s. This is to recall the time when Russia supported Slovenia’s freedom movements in the Balkans, when the country was under Austria. The flag was adopted on June 27, 1991 in the same crank as the country was declared independent. On their coat of arms is a stylized image of Mount Triglav, the wavy lines below are a symbol of the sea and rivers.

The country shares borders with Italy in the west, with Austria in the north, with Hungary in the northeast and with Croatiain the south and southeast. Slovenia is mountainous and covered with forests with fertile valleys. From the Alps in the northwest of the country, the highest point of which is Triglav at 2,864m, the Sava River runs southeast and cuts through the coal mining districts. In the northern border region lies the Karavanke mountain range. The area between the rivers Mura, Drava, Savinja and Sava is known for its wine production. West southwest of Ljubljana, on the banks of the Soca River, the climate is less “continental”. The capital has an annual average temperature of 9 ° C, with minus 1 ° C in winter and 19 ° C in summer. The subsoil is rich in coal and mercury, forming the basis for the country’s industry. The metal and chemical industries are heavily polluting the Sava River and coastal areas with heavy metals and toxic substances. In addition, forest death is due to acid rain.

Religion: The majority of the population is Catholics, 83.6%; Christians who profess to the traditional Slovenian church and the Orthodox faith, 16.4%.

Language: Slovenian is the official language; In addition, Serbo Croatian is spoken.

Government: Borut Pahor, President since December 2012, re-elected in 2017. Miro Cerar, Prime Minister since September 2014. Two-chamber system; The National Assembly has 90 members – 2 of whom are elected from among the country’s ethnic minorities; The National Council has 40 members.