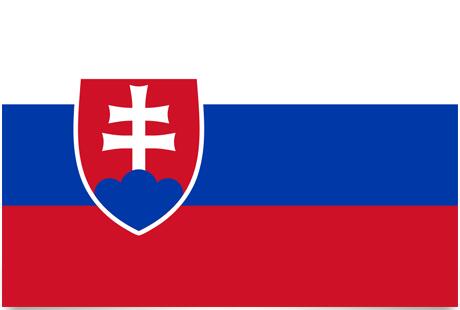 The tricolor has the pan-Slavic colors and the emblem against the inner edge of the flag is the country’s coat of arms. After the velvet revolution in 1989, the tricolor was reintroduced, but then it was without the coat of arms. The flag was official for the Slovak Republic. In 1992, in connection with the creation of an independent Slovakia with the dissolution of Czechoslovakia, the coat of arms was introduced in the flag in order to distinguish it from Russia. The flag was adopted on 1 September 1992 and the flag was hoisted for the first time two days later outside the castle in Bratislava.

The coat of arms holds a patriotic cross. It is a representation of Christianity and the three mountains below are a symbol of the mountains Tatra, Fatra and Mátra.

The country is mountainous and the Carpathians form the largest mountain range. The mountain regions are covered with forests, making the timber industry a major source of revenue, while the Danube and Uh valleys are lush agricultural areas. The country has significant deposits of copper, zinc, lead and mercury; there are also deposits of oil and natural gas. Pollution from industry is the most important environmental problem.

Language: Slovak is the official language; In addition, Hungarian is spoken.

Administrative division: 4 provinces, divided into 38 municipalities and the capital.

Government: Parliamentary Republic. The Constitution was introduced on January 1, 1993. Andrej Kiska has been President since June 2014. Robert Fico, Prime Minister since April 2012. Parliament has one chamber of 150 members elected for a four-year term.