Countries that Start with N

The Netherlands (Netherlands) is a kingdom in NV-Europe. The country has a coast to the North Sea and borders Belgium and Germany. The landscape is very flat. However, there are low mountains in a small area facing the lake. The Netherlands is intersected by numerous canals and rivers. About 1/4 of the land is below sea level and is protected by dikes. The Netherlands also includes Aruba and the Netherlands Antilles in the Caribbean.

There is a temperate coastal climate with cool summers and mild winters.

The country’s most important natural resources are oil, natural gas, wind power and agricultural land. The reclaimed former sea areas are very fertile. Among other things, vegetables, fruits and flower bulbs. Cattle breeding, dairy and horticulture are of great importance.

The Netherlands is a member of NATO and the EU. The country has a high standard of living and an expanded social system.

Norway is a kingdom in NV-Europe. The country includes the western and northern parts of the Scandinavian peninsula as well as the islands of Svalbard and Jan Mayen. Norway has coastlines to the North Sea, the Norwegian Sea and the Atlantic Ocean. The landscape is predominantly mountainous. The coastline is heavily carved with archipelagos, deep fjords, steep mountain peaks and numerous islands.

The climate is temperate coastal climate, which is due to the Gulf Stream’s warm water flowing up the west coast. However, there are cooler in the high mountains and in the N.

Norway is a rich country with a well-developed welfare system and a high standard of living. Norway is a member of NATO, but not of the EU.

Nicaragua is a republic in Central America. The country has coastlines to the Caribbean Sea in the island and the Pacific Ocean in V as well as land borders to Honduras in N and Costa Rica in S. The landscape consists of mountains with active volcanoes, valleys, highlands, rivers, rainforest. Along the coast of the island there are river deltas with lowlands, lagoons, sandbanks and coral reefs.

The climate is mostly tropical. However, there are cooler in the highlands. Earthquakes, hurricanes and volcanic eruptions occur frequently.

Agriculture is the main occupation. Among other things, cotton, coffee and sugar for export as well as rice, maize, wheat, millet, beans and fruit for self-sufficiency. Big cattle hold. Other important natural resources are fish, seafood, gold and copper.

Nicaragua has been plagued by civil war and political turmoil.

Namibia is a republic in SV Africa. The country has a coastline to the Atlantic Ocean and borders South Africa, Botswana, Zambia and Angola. Along the coast, the landscape consists of the Namib Desert, and in the Island of the Kalahari Desert, steppes and savanna. Inland Delta with swampy areas in the NE. Between the Namib and the Kalahari Desert, the landscape rises to limestone and sandstone plateaus.

There is dry tropical climate in the country. However, it is cooler on the coast due to the cold Benguela current.

The country’s most important natural resources are large deposits of diamonds, uranium, copper. Large cattle and sheep team and fishing.

Namibia was formerly a German colony, then the area of ​​mandate under South Africa. The country became independent in 1990. There are major social and economic differences.

Niger is a republic in V-Africa. The landscape is made up of the Sahara desert and flat plateaus in the N, mountains in the middle of the country, the Ténéré desert and bush steppes in the island and savanna in the S. Niger river flow through the southwestern part of the country.

In the northern part of the country there is a tropical climate with desert and bush steppes. Farthest towards S savannah with rainy season in June-September. Large variations in rainfall.

The most important natural resources are uranium, phosphate, baking soda and salt as well as agricultural land. Among other things, vigna beans, peanuts, cotton, rice, corn, millet, sorghum, cassava and onions. Big cattle hold. About 80% of the working population is engaged in agriculture and cattle breeding.

French colony until 1960. Niger is one of the world’s poorest countries.

Nigeria is a Federal Republic of V-Africa on the Gulf of Guinea. The landscape consists of lowland with lagoons, mangroves and rainforest in the S, a high plateau of volcanoes, mountains and savanna central in the country as well as dry bush steppes, plains and savanna in N. The largest rivers are Niger and Benue.

Formerly British colony. Independence in 1960. The country has been ruled by the military for several years and ravaged by political turmoil and conflicts between ethnic and religious groups.

The climate varies from subtropical with hot summers and mild winters in S to temperate and cooler in the highs.

Agriculture is the most important profession. Among other things, rice, corn, wheat, barley, oilseed, millet, fruit, vegetables, jute, spices and medicinal plants. The livestock team is great. Other natural resources are timber and timber, rubber and hydropower. Tourism is growing.

Nepal is one of the world’s poorest and least developed countries.

North Korea is a republic in East Asia. The country forms the northern part of the Korean Peninsula. The landscape consists of plateaus, ridges, low mountains, lowlands, coniferous forests, rivers and valleys.

There is a temperate monsoon climate with cold, dry winters and warm, rainy summers. Very severe winters in N.

The Korean Peninsula was divided into a northern and a southern state after the Korean War of 1950-1953. North Korea is communist and very isolated with a plan economy and a dictatorial regime. A large part of the population lives in poverty.

Nauru is an island republic in Oceania in the western Pacific, V of Kiribati. The island is a coral island with a central plateau surrounded by lowlands. The plateau consists of phosphate created by the accumulation of seabirds excrement over several centuries. Coral reefs on the coast.

There is a tropical climate with rainy season in the period November-February.

The country’s most important natural resources are the large phosphate deposits, which are expected to be depleted over the next 30 years. Australia, New Zealand and the UK pay compensation to the country for the extraction of phosphate on the island from 1919 to 1967. Fisheries and agriculture are very limited. Coconuts are the most important crop.

Nauru became independent in 1968, and is the world’s smallest republic.

New Zealand is located in the south west of the Pacific, SE of Australia. The country includes two large islands, the North Island and the South Island, as well as several small islands. The landscape is mountainous and consists of low ridges and grasslands on the North Island. On the South Island lies the Southern Alps mountain range. There are many volcanoes, hot springs, geysers and sulfur lakes.

Towards S there is a temperate coastal climate, however, more subtropically longer towards N. Earthquakes occur frequently.

The most important natural resources are oil, natural gas, coal, hydropower, geothermal energy and agricultural land. The cattle and sheep team is large. New Zealand is one of the world’s largest producers of wool, lamb and dairy products.

New Zealand has a high standard of living and an extended welfare system. 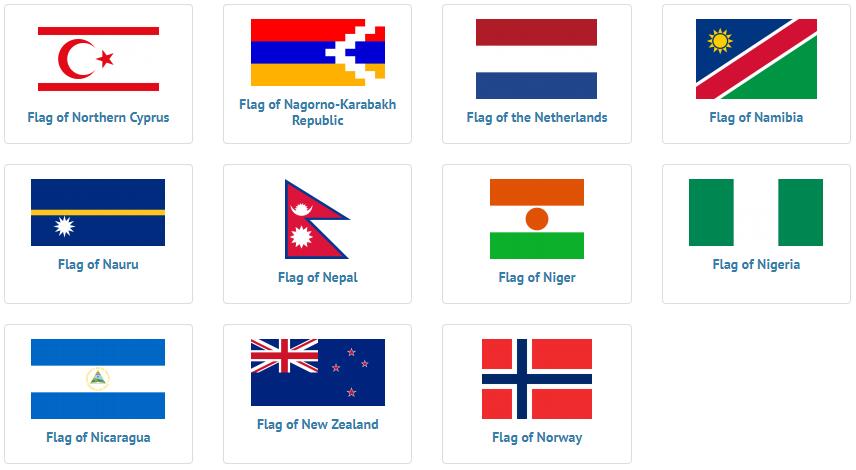