Nicaragua, State of Central America; 130 700 km2, 6.5 million residents (2019).Nicaragua is Central America’s largest country and borders in the north to Honduras and in the south to Costa Rica and has coast to the Caribbean in the east and the Pacific in the west. The eastern half of Nicaragua, called the Atlantic Coast, has since 1990 limited self-government. The capital is Managua (1 million residents, 2018).

The interior of Nicaragua is dominated by the Central American part of the Cordillarians; Coastal plains are spreading on both sides of this highland. The eastern coastal region is low and swampy. The west has a belt with some 40 volcanoes, some active. In southwestern Nicaragua is a sink with the big lakes Managua and Nicaragua. The eastern parts have a tropical rainforest climate, while the western parts are in the rain shadow and are almost steppe.

Nicaragua’s business is based on agriculture and industry, primarily small-scale manufacturing. Since 1990, a significant privatization of business has been carried out. Large areas are used for the export products coffee, sugar and bananas as well as pasture for steak cows. In recent years, the country’s economy has suffered poorly, much as a result of Nicaragua in 1998 hit by Hurricane Mitch and the collapse of international coffee prices in 2000. A significant portion of the country’s income comes from international aid and in the form of money as guest workers in the United States. 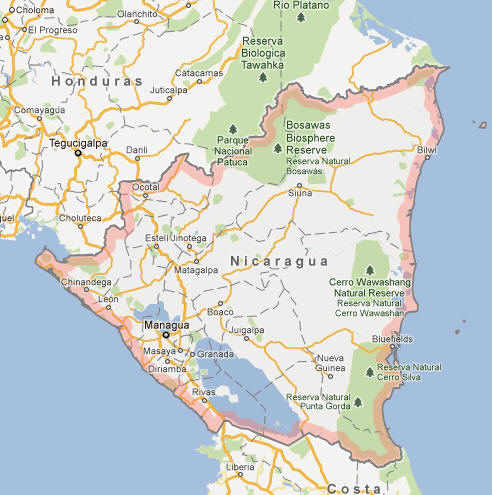