Where is Nicaragua located on the map? Nicaragua is an independent nation located in North America. Check out the following images to see location of Nicaragua on maps. 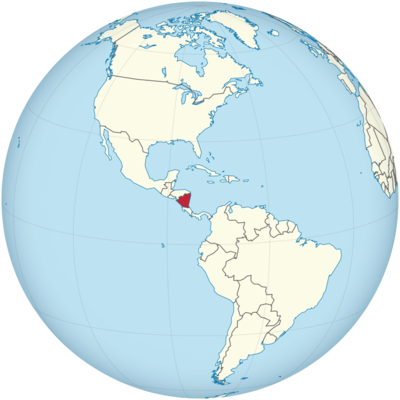 Nicaragua is in Central America. This is the name given to the mainland of Central America, which also includes numerous islands in the Caribbean. Nicaragua has two land borders: in the north with Honduras, in the south with Costa Rica.

The country can be geographically divided into three regions: the western coast, which is traversed by volcanoes ( Pacific zone), the central zone (mountainous and forested) and the Caribbean lowlands. Below you can find more maps of Nicaragua.

Nicaragua is in Central America.

The west borders the Pacific. Here, the northwestern tip has a share of the Gulf of Fonseca, which is also bordered by Honduras and El Salvador. In the west are also the major cities of the country.

The east borders the Caribbean Sea, a tributary of the Atlantic. The east and south are much less populated than the fertile west. The Caribbean coast has savannas and marshland in the northern part and dense rainforest in the southern part.

This region is also called the Miskito Coast, because this is where the Miskito people live. The Miskito Coast stretches across the border to Honduras in the north. It is much more rugged than the west coast. There are lagoons, bays and swampy marshland. The rivers that flow into the Caribbean Sea form large deltas. Most of the country’s natural resources are to be found here in the east.

A channel for Nicaragua

Again and again there were plans to build a Nicaragua Canal. This is to be built across the country and thus connect the Pacific with the Atlantic – just like the Panama Canal has been doing since 1914. However, after the Panama Canal widened from 2007 to 2016, these plans lost their foundation.

At the end of December 2014 it was announced that the construction of the Nicaragua Canal would begin, but the start of construction seems to be delayed. The canal would be built and operated by a group of companies from Hong Kong. The construction will destroy a large area of ​​rainforest. Animal species that are already endangered are threatened. Because the canal is to run through Lake Nicaragua, many species of fish are also endangered because the lake would turn into a saltwater lake. There are lawsuits against the project.

A chain of volcanoes lies on the Pacific coast. You named Nicaragua the “Land of a Thousand Volcanoes”. These volcanoes include, for example, the Momotombo on Lake Managua and the Mombacho on Lake Nicaragua. Like earthquakes, volcanoes have repeatedly led to disasters during eruptions. However, their ashes make the land around them fertile arable land.

The highest mountain in Nicaragua is the Pico Mogotón . It is located in the north on the border with Honduras. He’s a volcano too. It lies in a mountain range called Cordillera Isabella.

There are two large lakes in Nicaragua.

In the southwest is the Nicaragua Lake or in Spanish Lago Cocibolca. It is 8,170 square kilometers. It is almost as big as the entire island of Corsica. There are more than 400 islands in Lake Nicaragua. The largest are Ometepe and Zapatera. Both are formed by volcanoes and both are inhabited. In the south are the Solentiname Islands. They are also inhabited.

The river Río San Juan rises in the south of Lake Nicaragua, which then forms the border with Costa Rica and finally flows into the Caribbean Sea. In the north it is connected to Lake Managua by the River Tipitapa.

Lake Managua is called in the language of the indigenous people Xolotlán Lake. It is 60 kilometers long and up to 32 kilometers wide. Its area is 1134 square kilometers. The capital Managua is located directly on the lake, into which the wastewater was discharged untreated for years. In the meantime, a sewage treatment plant has been built and the lake has now recovered significantly.

The climate is tropical and warm. It is warm or hot all year round. So the temperatures hardly fluctuate. There are no seasons. The average annual temperature on the coasts is 27 degrees. The maximum daily temperatures in Managua, for example, fluctuate between 31 and 34 degrees. At night it is still 20 to 23 degrees – all year round! In the mountains it is cooler the further you gain altitude.

It is particularly humid on the Caribbean coast in the east. It is the wettest region in all of Central America. There is often severe flooding in the rainy season. It lasts from April to November. Between July and October is also hurricane season, there are tropical storms.

The rainy season is shorter on the Pacific coast in the west, it lasts from May to October. Overall, only about a quarter of the rain that falls on the Caribbean coast falls.