Central America is the narrow and elongated part of America that forms the land link between South and North America. In a geographical sense, Central America encompasses the land area between the Atrato sink in northwestern Colombia and the Tehuantepecnäset in Mexico. According to this delineation, southeastern Mexico (approximately the states of Chiapas and Tabasco along with the entire Yucatán Peninsula) and a smaller area of ​​Colombia are located in Central America.

How Many Countries in Central America?

According to a political demarcation, however, Central America includes the seven independent countries. They are: Guatemala, Belize, El Salvador, Honduras, Nicaragua, Costa Rica and Panama. In economic regards, the term Central America is often used in the five states of Guatemala, El Salvador, Honduras, Nicaragua and Costa Rica. These countries can be regarded as an economic-political entity with some justification, but the demarcation also has a historical background: Belize, formerly British Honduras, became independent in 1981, and Panama was a part of Colombia until 1903.

The countries of Central America feature tropical climate and people, largely mestizo. The population is predominantly Catholic and its economy is based on agriculture. Spanish and English are the predominant languages, but indigenous languages ​​are known to many people because of their ancestry.

Map of Countries in Central America 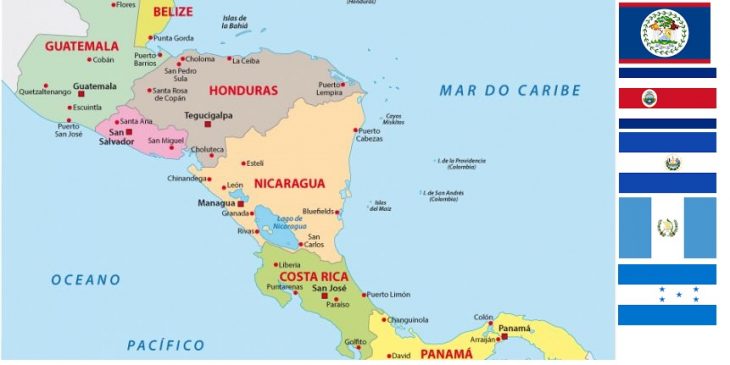 All Countries in Middle America and Their Capitals

Saint Vincent and the Grenadines

The Central American Common Market (MCCA) emerged in 1960 with the aim of creating a common market for the region. From this bloc, it is intended to constitute the Central American Union, in the same way as the European Union. The following nations are founders and current members of the MCCA: