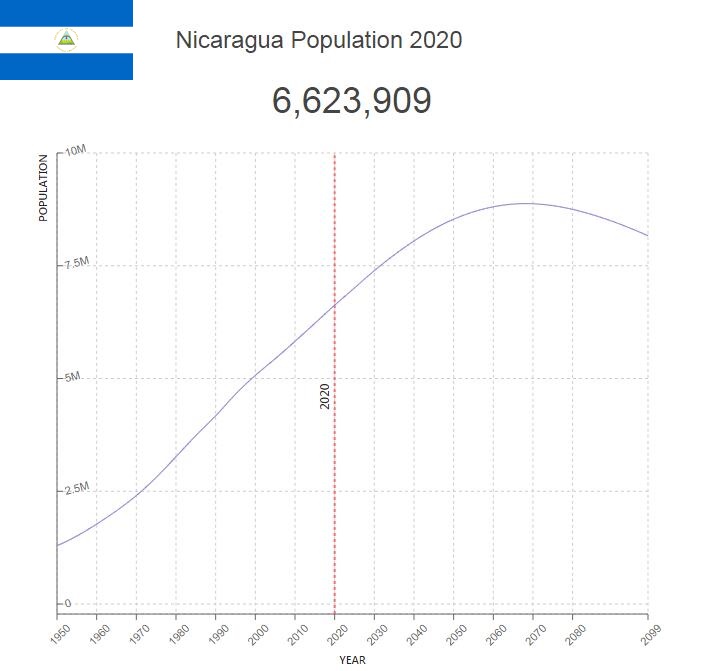 Nicaragua has a long history with a number of civil wars. The country is currently struggling with financial problems, partly due to political instability. The country’s governance is strongly criticized for gross violations of human rights.

The majority of the population lives in the western half of the country, where also the largest cities are: Managua, León, Masaya and Chinandega.

Population of Nicaragua by Year (Historical)

Major Cities in Nicaragua by Population

The name Nicaragua derives from Nicarao; The name Spaniards gave a Nahuatl- speaking people who originated in central Mexico, but who migrated around 700 AD. This migration may be related to the expansion of the interpreters. Around the 13th century, they settled on Lake Nicaragua. By the Spanish conquest, colonial officials estimated the population to be around 600,000. After the colonization, the Nicarao people have been largely absorbed by the Spanish descendants and have joined the Spanish-speaking Mistis population who make up the majority in the country. Around 9 percent of the population today is considered to have an African background, and the indigenous population is around 5 percent.

The east coast of Nicaragua has a different colonial history than the west coast and the population is therefore different. The Caribbean coast of Nicaragua has been under English rule for over a hundred years, and even after its incorporation into the Republic of Nicaragua, the area has been difficult to access for central government powers that have always existed on the west coast. The people of the west coast have a stronger connection to the British Caribbean than the Spanish Latin America, and English still serves as a lingua franca for the various peoples of this coastal area. It is also on the Caribbean coast that the main emphasis of indigenous groups resides. The largest indigenous peoples group in Nicaragua is michito and includes about 125,000 people. Some smaller groups include Sumu (also called mayangna, c. 13,500) and Rama (c. 1350), which are groups that traditionally practice horticulture, hunting, fishing and sanctioning, but today large sections of this population live in urban areas.. More than 30,000 black Creole live in Nicaragua today and the origin of the Garifuna ethnic group (c. 2000) is also the result of slavery in the Caribbean in the 18th and 19th centuries.

In western Nicaragua, there are only a few communities that are still considered indigenous (nicarao, matagalpa and sutiaba).

In connection with the revolution and the civil war, which characterized the country from the late 1970s to the beginning of the 1990s, about 250,000 Nicaraguans fled the country to neighboring countries and the United States. After the end of the civil war in 1990, one saw that, although some of the emigrated Nicaraguans moved back during the 1990s, the flow of emigration continued, especially to the United States and the economically prominent neighboring Costa Rica.

After the riots and political violence in the spring of 2018, another large mass migration from Nicaragua saw. Over 100,000 Nicaraguans emigrated in the first year only after the riots began. In April 2019, the UNHCR estimated that 60,000 Nicaraguan have sought asylum in Costa Rica alone. Among those seeking asylum are students, former government officials, opposition figures, journalists, doctors, human rights defenders and peasants.

The majority of the residents belong to the Catholic Church. However, the percentage of Protestants (mainly Pentecostal and Baptist) has increased substantially in recent years and some studies estimate that over 40 percent of Nicaraguan people are now Protestants. The rise of Protestantism takes place largely in the larger cities and on the east coast.

Spanish is the main language, but English and indigenous languages ​​are also spoken.