Located in the south of the Asian continent, South Asia is also known in other classifications as the Indian subcontinent, so it is clear that one of the countries that make up this region is India, the second most populous country in Asia, and the world as well. Other countries present in this region are: Maldives, Pakistan, Nepal, among others. One of the main characteristics of South Asia is that it is one of the poorest regions on the Asian continent. The population faces problems, such as high infant mortality, low life expectancy and little development.

How Many Countries in Southern Asia

South Asia is one of the largest and most populous subcontinents on the planet. Covering the official territory of more than 5 million km², Southern Asia is composed of 8 independent countries (Afghanistan, Bangladesh, Bhutan, India, Maldives, Nepal, Pakistan, and Sri Lanka). See below for the full list of Southern Asian Countries by population.

Bangladesh is a republic in South Asia on the Bay of Bengal. Bangladesh is the world’s eighth most populous country and ninety – third largest country by area, making Bangladesh one of the most densely populated countries in the world. The majority of the population are Bengali Muslims, followed by Bengali Hindus, with various Buddhist and Christian communities. The official language is Bengali.

Bhutan is a kingdom in southern Asia that borders China to the north and India to the south. The country became independent from India in 1949 and a total of about 750,000 people live in Bhutan.

India, officially the Republic of India, is a Federal Republic of South Asia. It is the seventh largest country on the surface, the second most populous country and the most populous democracy in the world. India is often called “the world’s largest democracy”.

The Maldives, formally the Republic of the Maldives, is an island nation in the northern Indian Ocean consisting of 26 atolls with 1,192 islands of which 200 are inhabited, together populated by about 300,000 residents.

Nepal, formally the Federal Republic of Nepal, is a republic on the southern slope of the Himalayas between China in the north and India in the east, west and south.

Pakistan, formally the Islamic Republic of Pakistan, is a country in Asia. The country is usually located in different geographical sub-areas depending on the context, such as the changing Middle East, the Middle East, South Asia, Southwest Asia and West Asia.

Sri Lanka, formally the Democratic Socialist Republic of Sri Lanka, is an island nation in South Asia, located southeast of India. Sri Lanka has around twenty million residents and consists of a large tropical island and a number of small islands. Sri Lanka is a member of the Commonwealth.

Afghanistan is a country in southern Asia and is usually included in Central Asia. The country is mountainous and lacks a coast and borders Pakistan, Iran, Turkmenistan, Uzbekistan, Tajikistan and China. Kabul is the capital of Afghanistan.

List of Countries in Southern Asia and Their Capitals

As noted above, there are eight independent countries in the South Asia. Among them, the largest country is India and the smallest is Maldives in term of population. The full list of Southern Asia countries with capitals is shown in the table below, ranked by latest total population and area. 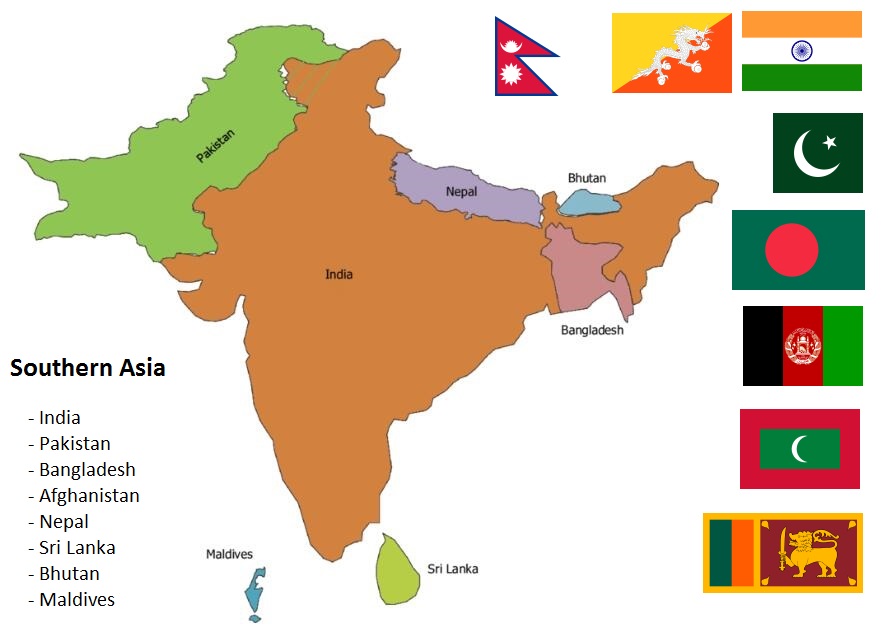