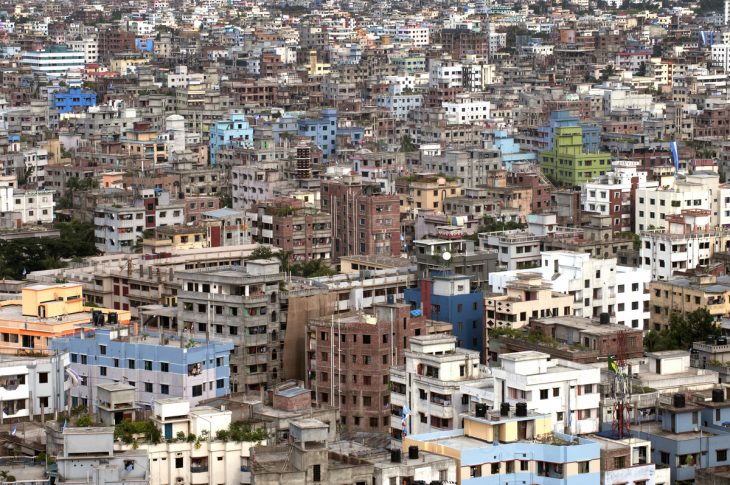 Dhaka, the capital of Bangladesh, lies on a plain in the Ganges Delta, by the Burhi Ganga Canal; approximately 18.9 million residents (2017). The city is an important river port and the country’s leading commercial and industrial center, with further processing of products from the surrounding areas. The industry includes large jute and cotton factories. Traditional handicraft products include muslin, embroidery, silk work and jewelry.

Dhaka’s name is said to refer to the dhak tree, once common in the area, or to Dhakeshwari (“The Hidden Goddess”), whose sanctuary is in the western part of the city.

Since its establishment as Bagladesh’s capital in 1971, the area and social and economic diversity of Dhaka have evolved tremendously. Together with the river port of Narayanganj, 16 kilometers north, Dhaka is now one of the most industrialized areas in the country.

The city has several universities, including the University of Dhaka (1921), Bangladesh Technical and Technological University (1962), and Jahangirnagar University (1970). Dhaka also has a number of colleges, a nuclear training and research center, a national library, a museum and a national art gallery.

Dhaka is also home to the ancient city of Vikramapura, formerly the capital of the Pala rulers in Bengal (800–1200). Among Dhaka’s newer buildings is the Star Mosque (Tara Masjid), built in the Mughal style in the early 1800s with later renovations. Built at the beginning of the 20th century, Curzon Hall at the University of Dhaka combines Mughal and European influences.

Dhaka first became important as the capital of East Bengal during the Mogul empires in the 17th century. The city was the capital of the Muslim Mughal dynasty in Bengal Province (1608–1639 and 1660–1704). The city had a thriving sea trade and attracted English, French, Armenian, Portuguese and Dutch traders.

Historical buildings from the Muslim period include Lalbagh Fort (1678), the tomb of Princess Bibi Pari (died 1684), Bara Katra (a building historically used to house travelers, 1646), Chhota Katra (1663) and Hussaini Dalan (a religious monument to the Shi’ite branch of Islam, 1642). Other 17th-century buildings include Hindu Dhakeshwari Temple and Tejgaon Church, built by Portuguese.

When the provincial capital was moved to Murshidabad in 1704, Dhaka entered a period of decline. The city again gained great importance when the British designated it as the capital of East Bengal and Assam Province (1905-1912).

In the early 20th century, Dhaka was a commercial center and learning center. After the British withdrew, the region became part of Pakistan and Dhaka became the capital of East Bengal Province (1947) and East Pakistan (1956). Dhaka suffered major damage during the independence war in 1971, and since independence in 1971 has been the capital of Bangladesh. 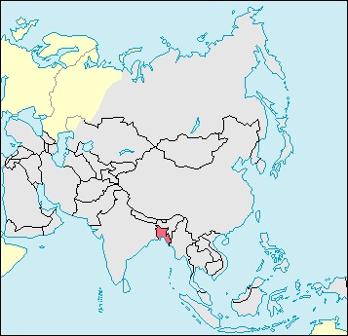