Where is Bangladesh located on the map? Bangladesh is an independent nation located in Southern Asia. Check out the following images to see location of Bangladesh on maps. 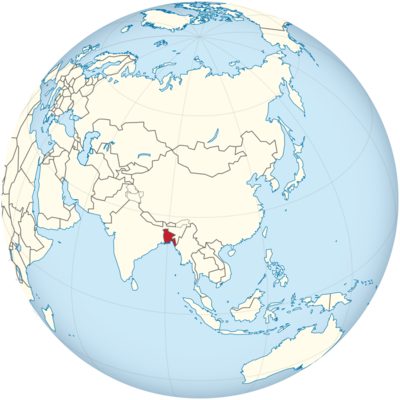 Bangladesh is located in southern Asia and borders the Gulf of Bengal in the south and the state of Myanmar in the southeast. If you look at the map, you will see that Bangladesh is almost completely enclosed by Indian provinces. The border that connects the country is almost 4,000 kilometers long.

Bangladesh lies in a river delta. Three rivers run through this delta: the Ganges, which also flows through India, the Brahmaputra, which has its source in Tibet, and the Meghna. The mouth of these rivers takes up almost half of the country. They are also very important transportation routes for people. Here you not only transport yourself, but also animals and food that they need for everyday use.

Sometimes you also see the spelling “Bangladesh”, which is the English spelling of Bangladesh.

On the map you can see the exact location of Bangladesh.

It has in recent years a lot of money in upgrading the infrastructure put Bangladesh and expanded roads and other transport routes. But because of the natural disasters, especially the bad floods, a lot breaks down again and again. The roads in the country are also a risk for the safety of motorists. Often whole areas are under water. In addition to the floods, there are always drought disasters.

The largest mangrove area in the world is in Bangladesh. It is a national park called the Sundarbans. This is in the western coastal region of Bangladesh. The roots of the mangroves are very firmly anchored in the silt. This protects them against the high tidal waves that are common in these regions. And fish also feel very comfortable between the roots. The largest lake in the country is called Kaptai Lake. The highest mountains are in the southeast of Bangladesh and are quite low compared to the mountains of Pakistan and India, because they only reach a height of about 1000 meters.

Rivers and Lakes in Bangladesh

Bangladesh is very rich in rivers. 240 traverse the relatively small country with its 147,570 square kilometers total area. It is about twice as large as the state of Bavaria. Nevertheless, it is very densely populated, because 163 million people share the entire area. In Germany, around half as many people live in a much larger area. Since almost a third of the country is barely above sea level, much of Bangladesh is inundated year after year. But the mud is fertile and fertilizes the soil. Bangladesh is one of the most fertile alluvial areas on earth.

Precipitation falls throughout the year, especially during the monsoon season from April to October. The humidity here sometimes rises to 95 percent. Overall, the climate is subtropical and humid. The summers are humid and there is a lot of rain. In the summer it gets very hot, temperatures can reach up to 40 degrees or even more. Due to the heavy rain, floods often occur, and cyclones are also not uncommon. Winter lasts from November to March and at this time the humidity is more pleasant and reaches around 65 percent.

Precipitation increases from west to east. In the Tripura-Lushai Mountains in eastern Bangladesh in particular, up to 4,000 millimeters of rain fall a year. There are three seasons. From late May to early October is the monsoon season, which brings a lot of rain. In the period from late October to late February, the temperatures are cooler. It gets particularly hot between mid-March and mid-May. Then drought can reign in this rainy country because there is no precipitation.