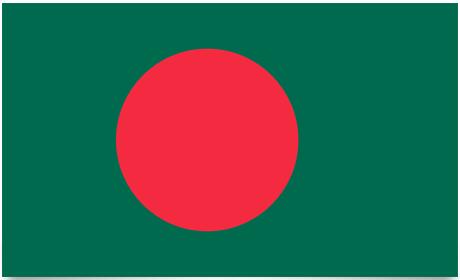 The flag of Bangladesh, adopted on 25 January 1972, consists of a red circle that is slightly closer to the inner edge than the outer one and behind the circle is a green background. The red circle symbolizes the rising sun, but also the blood sacrificed for the country’s independence. The green stands for the lush nature of the country.

The flag is based on a predecessor used during the war of independence against West Pakistan (now Pakistan ) in 1971, which was a nine-month conflict. During this conflict, the flag had the contour of the country in the red circle filled with orange in addition to its current appearance. The flag of Bangladesh has a ratio of 3: 5.

Bangladesh is a large plain and delta country, located where the rivers Ganges and Brahmaputra flow together and out into the Bengal bay. It is on 3 sides surrounded by India. The soil is very fertile and rice, tea and jute are grown. There are also significant areas of forest and swamp. The climate is tropical and characterized by the monsoon with extensive rainfall during the rainy season from June to September. Bangladesh is often ravaged by cyclones during this period, causing extensive flooding with disastrous consequences. The country’s only mineral resources are poor quality coal and natural gas. The rising sea level also poses a threat, as the majority of the population lives residents areas at sea level. The coastal area is affected by pollution from untreated wastewater from industries and the population. This relationship, coupled with the overfishing of crayfish to supply domestic markets and exports, has led to the partial destruction of one of the country’s sources of wealth.

The people: Ethnically and culturally homogeneous. It emerged 25 centuries ago when the local Bengali population merged with Aryan emigrants from Central Asia. There is a small minority of Urdu and Indians. residents the south-eastern part of the country against the border with India there are 13 ethnic groups, of which Chakman people fled to India after a long conflict with the authorities residents 1981.

Religion: Predominantly Islam (83%), Hindu (16%), as well as a number of Buddhist and Christian minorities.

Political parties: Bangladesh Jatiyatabadi Dal (GDP, Bangladesh Nationalist Party) – center-right-wing; Awami League (AL) which is residents favor of a social democratic policy with some intervention by the private sector; Jatiya Dal, there is an alliance of 5 nationalist parties that are Islamic inspired; Jamaat-e-Islami, who are Islamic fundamentalists; Communist Party and other smaller parties.

Government: Parliamentary Republic. Abdul Hamid has been President and Head of State since March 2013. Sheikh Hasina has been prime minister since January 2009, re-elected residents 2014. Parliament is a one-chamber system of 330 members, of whom 300 are directly elected and 30 are women elected by parliament. The term of office is 5 years.