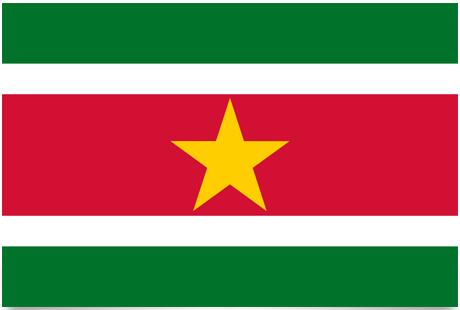 Green stands for hope and a good harvest, white is a symbol of justice and peace. The star is for a united people and red for love and a good faith in progress.

The colors of the flag come from the two largest political parties at the time the flag was created. In designing the flag, it was also borne in mind that the flag should radiate cohesion and faith in the future. The flag was adopted on November 25, 1975 with the independence of the Netherlands. Before independence, the flag was white with five stars in different colors attached to a circle. They represented the larger ethnic groups that made up the population.

The low-lying coastal areas are suitable for the production of rice, sugar and other agricultural products, but may be affected by floods. Land from the sea has been recovered through desiccation work and dam construction. The interior of the country is higher-lying plains with a subsoil rich in bauxite and dense tropical vegetation. The rainfall is extensive, falls throughout the year and has made the country rich in rivers and streams. Some of these rivers are used in hydroelectric power stations for the production of electricity, which is again used in aluminum production. The country is not plagued by more serious ecological problems.

The people: Mix of the European conquerors, slaves and indigenous people as in other parts of Latin America. In addition, the population of Surinam is strongly influenced by the immigration from other Dutch colonies. The Creole (of European, African and Asian origin) make up 30% of the population. Javanese 16%, Indians and Pakistanis 33%, Cimarrones (Africans) 10%, Indigenous people 3% and Dutch. Official estimates estimate that 1/3 of the population (around 175,000 people) lives outside the country – especially in the Netherlands.

Language: Dutch (official), English is trade language. Furthermore, Hindi, Javanese and Taki-taki or senang-tongo are spoken according to the region based on African languages ​​mixed with Dutch, Spanish and English.

Political parties: Most parties reflect ethnic rather than programmatic differences. Nevertheless, most of the opposition parties gathered in the May 1991 elections in the New Front for Democracy and Development, which gained a majority in parliament. The front consists of the National Party of Surinam (NPS), the Progressive Reform Party (VHP) representing the interests of the Indian people, the National Solidarity and Unity Party (KPTI) representing the interests of the Indonesian people, PALU representing the interests of the workers and peasants and the Labor Party (SPA). The National Democratic Party (NPD) is the political arm of the military. The center-left Democratic Alternative is a scaling off of the Front that wanted a closer approximation to the former colonial power. In addition to the “Jungle Command” led by Brunswijk, 3 other armed groups are active in the country: Angola; The Mandela Liberation Movement represents parts of the African-American population, while the Amazon Tucayana organization demands native autonomy and right to the land.

Government: Parliamentary Republic. Dési Bouterse has been President since August 2010. One chamber parliament with 51 seats.