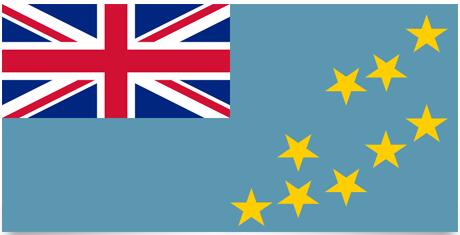 The flag of Tuvalu was adopted in connection with the country’s independence on October 1, 1978 with the proportions 1: 2. The flag is light blue in the background with Union Jack in the upper left corner and nine yellow five-pointed stars on the right side of the flag. The stars on the flag represent the nine islands that make up Tuvalu. The placement of the stars on the flag shows how they placed e relative to each other.

Tuvalu received a new flag on December 3, 1976, when Tuvalu broke away from British possession of Gilbert and the Ellice Islands. That flag consisted of the British Blue Ensign and Tuvalus coat of arms, this flag has been replaced since 1978 by the flag that still applies today.

Tuvalu consists of 9 coral tolls, the Ellis Islands, extending 560 km in a northwest to southeast direction and covering a sea area of ​​1,060,000 km2. The archipelago lies immediately south of the equator, 4,000 km northeast of Australia and south of the Gilbert Islands between Micronesia and Melanesia. The group consists of the atolls Nanumea, Niutao, Nanumanga, Nui, Vaitupu, Nukufetau, Funafuti, Nukulaelae and Niulakita. The climate is tropical and rainy and with soil strongly marked after erosion. The landscape is completely flat and the main economic activities are fishing and the cultivation of coconut trees.

The People: The population is Polynesians (96%) originally from Samoa and Tonga

Government: Iakoba Italeli is the Governor-General and Head of State, appointed by the British Crown in May 2010. Enele Sopoaga has been Prime Minister since August 2013; re-elected in 2015. Parliament has one chamber with 15 members elected by popular elections every 4 years.