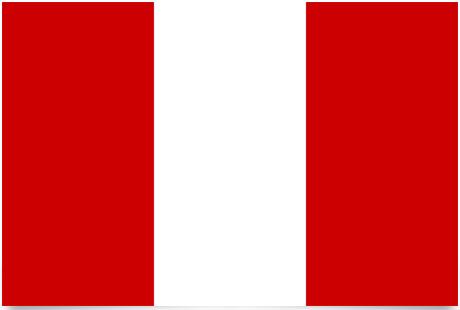 According to tradition, the freedom hero José de San Maritin, when he saw a flock of red-and-white flamingos take off, said ?? This will be the flag of freedom! ??. As he said, so be it and the red and white flag is the symbol of the struggle against Spain for Peru’s freedom. From the beginning there was also a sun on the flag, it was removed by Simon Bolivar in 1825 and the current flag was adopted on 25 February the same year. The sun and also the colors in the flag are old Inca symbols.

Peru’s state and army flags have two differently designed emblems in the middle, but with the same symbols. There are coats of arms that show the llama animal vikunja, the Chinese tree and a cornucopia full of gold money.

The Andes mountain chain divides the country into 3 regions: the coastal signs, the highlands and the Amazon jungle. The coastal area is desert-like but with large plantations (especially sugar and cotton) based on irrigation – historically the country’s most modern and western-oriented part. About half of the population lives in the highlands – mostly between the two ridge of the Andean chain. The majority of farmers organized in ayllus, there is an old form of society with features from the Incas community. Agriculture is a subsistence farming based on the cultivation of maize and potatoes. The llama and alpaca team have been forced back to the most remote areas of the highlands as a result of widespread mining and sheep farming. The lowland to the Amazon jungle in the east is sparsely populated and characterized by tropical climate. Peru is one of the world’s largest producers of the coca plant, which has medicinal properties, has traditionally been used in the indigenous culture and is today artificially processed into cocaine. The country is suffering from the depletion of the already poor soils. Overfishing has drastically reduced the presence of certain fish species, and the coastal area is generally polluted by emissions from industries and households.

The People: Nearly half of the country’s population is based on the indigenous peoples of Quechua and Aymara, which are the two largest groups of people in the country. In the coastal area, the mestiz population – the mix of Spanish conquerors and natives – is dominant as well as small communities of descendants of African slaves. In the Amazon there are a number of smaller ethnic groups.

Religion: Catholicism (official and dominant) – though often mixed with the native rituals of the indigenous people.

Paramilitary forces: 60,000 (National Police). 600 (Coast Guard). In addition, the military has formed 2,000 Rondas Campesinas – self-defense groups in the countryside in the state of emergency.