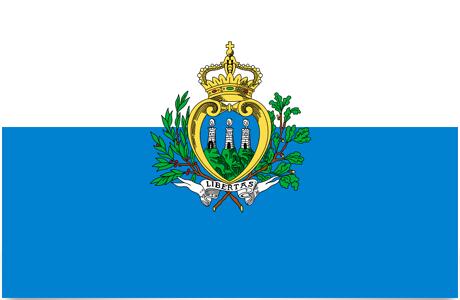 The flag was first recognized as the state flag of San Marino by Napoleon in 1799. It did not become the official national flag until April 6, 1862, the year the country entered into an agreement with the newly formed Kingdom of Italy. The white color stands for the snow that covers the mountain top of Monte Titano and the blue color is the clear sky.

The state coat of arms can also be found on the state flag. The three towers of the coat of arms stand for the towers of the capital, which are surrounded by a wall at the top of Mount Titano. The crown is a symbol of the state’s sovereignty. On the white ribbon it says ?? Libertas ?? and stands for the freedom of many of the persecuted in history who have been found in San Marino.

Founded in 1866, the Republic of San Marino is located between the Italian provinces of Romana and Marca and is the smallest republic in the world. The landscape is mountainous. It is located on the Titano mountain, located in the eastern paver of the Appenines chain. Pico de la Rocca (749 m) is the highest point in the small town. In the countryside wine, grain and goats are grown. However, tourism is the country’s main source of income. It is located near the town of Rimini on the Adriatic coast.

Political parties: Multiparty system. The Christian Democrats (PDC) have 26 seats in parliament. The Socialist Party (PS) has 14. The ex-Communist Democratic Progress Party has (PDP) 11. The People’s Alliance (AP) has 4. The Democratic Movement (MD) has 3. Rifondazione Comunista (RC) has 2.

Government: Presidential Republic. The executive stems from the 10-man State Council, elected for a 6-month term (dominated by PS and PDC). It is stated by the ruling Capitanes: Enrico Carattoni and Matteo Fiorini, who have been head of state and government since October 2017. Parliament has one Chamber (the Grand Council) with 60 members elected every 5 years by direct election.