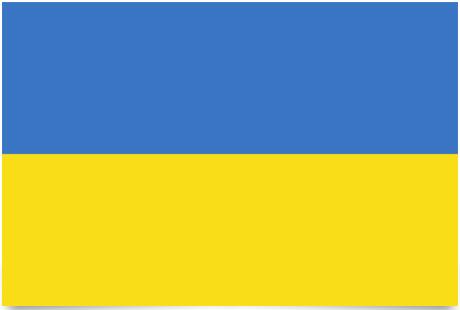 The flag of Ukraine was adopted in connection with independence at the end of the First World War but was unofficially used by several short-lived states that existed between 1917 and 1920. The flag was banned when the Red Army occupied the country and proclaimed the Soviet republic of Ukraine.

During World War II, the flag was used by Ukraine, which was then German-occupied. It was not allowed in 1945 until 1991 when it was withdrawn on September 4 of the same year. The flag is blue and yellow in two equally wide horizontal bands. Blue and gold or yellow as it is in the flag were used as the colors of the Kingdom of Kiev even before Christianity had been introduced.

Ukraine borders Poland, Slovakia, Hungary, Romania and Moldova in the west and southwest, with Belarus in the north and Russia in the east and northeast. In the south it is adjacent to the Black Sea and the Azov Sea (Acovsko More). The landscape is mostly flat with some hill areas. In the southwest it borders the Carpathian mountains and in the south to the Crimean mountains. The country has temperate mainland climate. In the south, the land is black and covered with steppes. In the north there is mixed forestry (14% of the area). The pollution of rivers and the atmosphere is considerable. About 2.8 million people live in areas that are contaminated by Chernobyl disaster.

Government: Petro Poroshenko, President and Head of State since June 2014. Volodymyr Groysman, Prime Minister since April 2016. Parliament has one chamber, the Supreme Council with 445 members. 220 of these are selected in single-member circles, while 225 are selected according to a proportional system.