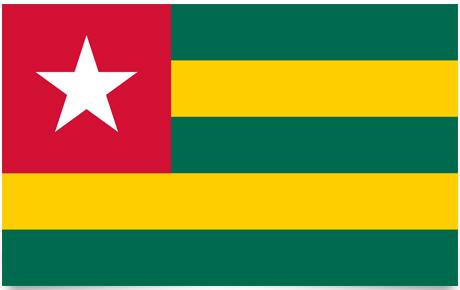 The Togolese flag was adopted in connection with the much-anticipated independence on April 27, 1960, with a ratio of 1: 1.5. The flag contains 5 horizontal bands, three green and two yellow. In the upper left corner is a small red square with a white five-pointed star inside.

The flag contains the classic pan-African colors and in this particular flag stands the green color for agriculture, the yellow color for the finds in the country’s mines and the red color represents blood sacrificed during the struggle for independence. The five bands represent the five regions of Togo and the star is for hope. The way the flag is designed is in some ways reminiscent of the Liberian flag.

Land forms a narrow strip, divided into different horizontal regions. To the south is a low-lying area of ​​lagoons characteristic of the Gulf of Guinea; the coastal area is densely populated and manioc, corn, banana and oil palm are grown here. Further to the north is an area of ​​subsistence agriculture that is gradually replaced by coffee and cocoa plantations. The country is cut from the northeast to the southwest by the Togo mountain range.

The people: The dominant ethnic groups are: ewé-adja (43.1%), tem-kabye (26.7%); gourmet (16.1%); kebu-akposo (3.8%); ana-ife (yoruba) 3.2%. The descendants of freed slaves who returned «home» from Brazil are called «Brazilians». They form a social group with great political and economic influence. A small European minority of 0.3% is concentrated in the capital.

Language: French (official). The most important native languages ​​are ewé, twi and hausa.

Political Parties: The Association of the People of Togo (RPT) was the only legal party between 1969 and 1991; The coordination of new forces. Opposition parties are: The Union of Forces for Change; Renewal Action Committee; Patriotic Pan-African Association; The Party for Renewal and Democracy; the Democratic Convention of African People; The Union of Independent Liberals.

Government: Fauré Gnassingbé has been president since February 2005, re-elected in 2010 and 15. Komi Sélom Klassou has been prime minister since June 2015. Parliament has one chamber with 91 members.