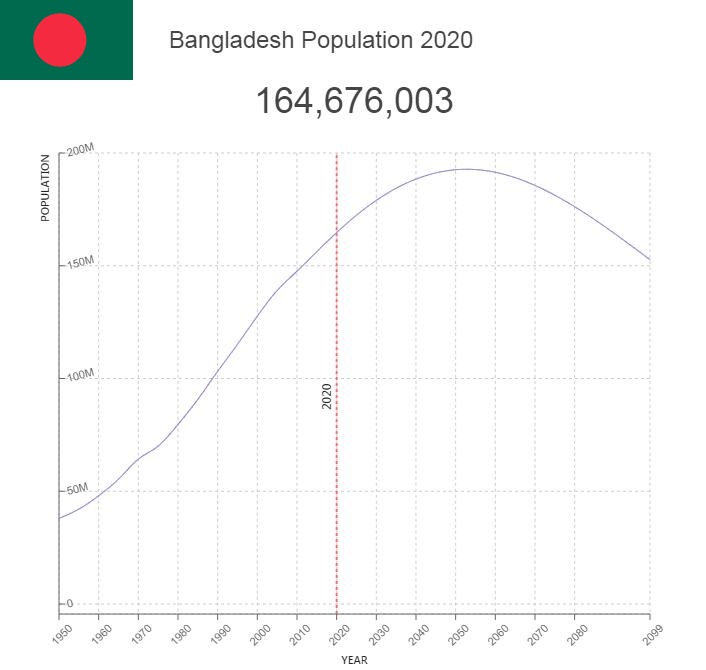 Bangladesh is one of the most densely populated and poorest countries in the world. The two great rivers Brahmaputra and Ganges flow through the land, causing the land to be constantly flooded. 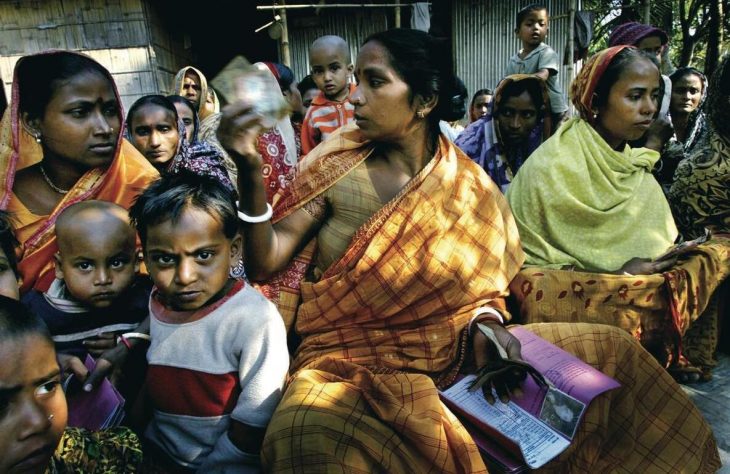 With a population of just over 157.8 million (2017) distributed over 144,000 km2, the population density in Bangladesh is high, averaging over 1100 people per km2, but in the best rice areas along the lower Ganges (Padma and Meghna) it can live up to 3000 people per km2. The population pressure is high in this agricultural community. The population doubled in the period 1950–80, but the country has since experienced a sharp decline in birth rates. Population growth (2017) is 1.04 percent annually.

Population of Bangladesh by Year (Historical)

Major Cities in Bangladesh by Population

The vast majority of the population of Bangladesh are Bengalis, which denote both an ethnic and a linguistic group. The Bengali people are historically of complex origin and have come from different communities and into the region over many centuries.

The Vedda people were probably the first to settle in the area. According to some ethnologists, they were followed by people from the Mediterranean and nearby areas who spoke Indo-European languages. During the 8th century, people of Arab, Persian and Turkish origin moved to the subcontinent, and from the 13th century these population groups came to Bangaldesh.

Only a small proportion of the population is non-Bengali, and these are mainly small indigenous groups. Most of these live in the Chittagong Hill Tracts in the southeast, the least populated part of the country. Some of the groups are affiliated with the people of Myanmar.

High birth and death rates have resulted in a very “young” population; just over 30 percent are under 15, a decrease of 5 percent from a decade ago. Only 5 percent of the population is 60 years and older.

Throughout history, Bangladesh (and Indian West Bengal) has been a crucible for various peoples and cultures. People from Myanmar, the Himalayas, Dravids (the original residents of the Indian Peninsula) and Aryans formed the first amalgamation.

With the moguls came people from all over the Islamic world. When East Bengal was separated from India in 1947, there were religious dividing lines. The part of the population that is Muslim has Indo-Indian or mixed Dravidian-Aryan background, while Hindus are mainly Dravidian.

Bangladesh also has several smaller peoples and tribes. On the rivers live bathhouses (also called river gypsies). Many tribes live in the hills of the Chittagong tracts in the southeast, others in the hills around Sylhet or north of Mymensingh. The tribes are either Buddhists, Christians, Hindus or animists.

Most live in the countryside and the urbanization rate is low. About a third of the population lives in cities. Still, cities are growing faster than the rest of the population. The capital of Dhaka is the country’s largest city. Other major cities are the port city of Chittagong and the regional centers of Khulna and Rajshahi.

Islam reached Bengal in the 13th century. Mahayana Buddhism quickly disappeared, and Hinduism gradually lost ground in favor of Islam, which was propagated partly by Sufis (Muslim mystics) and partly by Muslim immigration from other parts of India. The Muslims make up approximately 89.5 percent of the population (2016), the Hindus well over 9.6 percent. 0.6 percent are Buddhists, mainly theravada Buddhists among tribal people (chakma, mru and others) in the Chittagong area of ​​the southeast. Other tribes are Christians (bon, kuki, lushai).

The official language is the Bengali native language, which is the mother tongue of approximately 98 percent of the country’s population. Minority languages ​​are Urdu and Tibetan-Burmese languages spoken in the border areas against Myanmar. English is also widely used.