Known as the smallest island country, the Republic of Nauru is located in the central and western Pacific Ocean, 60 kilometers south of the equator. Covering an area of 21.1 square kilometers, Nauru is the world’s smallest island nation, with a population of only 12,000, 58% of whom are Nauru. Residents are Christian, with Nauru and English spoken. The currency is the Australian dollar and the capital is Yaren.

Nauru’s flag is blue with a yellow strip across in the center. Blue represents the sky and the sea, and the yellow stripe symbolizes the equator. A 12 pointed white star symbolizes Nauru’s 12 tribes.

When, in 1798, the British ship “Hunter” arrived, Naura was already inhabited by an indigenous population. In 1888 the island was incorporated into the German Marshall Islands protectorate, and in 1920 Nauru was placed by the League of Nations under the control of the United Kingdom, Australia and New Zealand, who co-managed it, with Australia representing the three countries. From 1942 to 1945 Naura was occupied by Japan, but in 1947 it became a United Nations trust territory, still under the control of Australia, New Zealand, and Britain. On 51 January 1968, it gained independence.

Nauru’s main source of income is phosphate, which it exports to Australia and New Zealand. The main agricultural product is coconut, and the country is almost totally dependent on imports for food and drinking water. Nauru has introduced free compulsory education, and the costs of higher education are provided by the government. 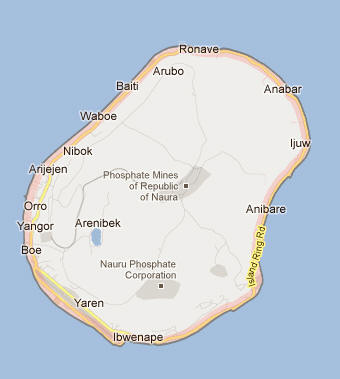