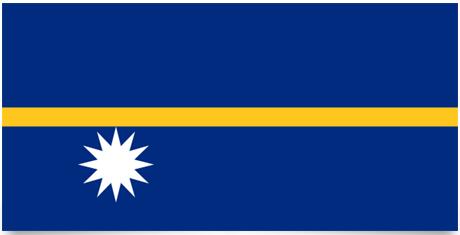 The darker blue color is a symbol of both sky and sea and the yellow band is the equator. The star’s location shows the country’s location relative to the equator, which is one degree to the south. The twelve capes in the white star represent Naurus ‘twelve original tribes, white stands for what has been the islands’ most valuable natural resource and only export; phosphate.

Their flag was adopted the same year and date they were declared independent from Australia. This took place on January 31, 1968. The country was formerly called Pleasant Island, and is the world’s smallest independent republic, both in its area and population.

Nauru is a 4 * 6 km large coral island located in Micronesia almost on the equator. The island is surrounded by sandy beaches and a 300 meter wide fertile belt. The interior of the island consists of a 60-meter-high plateau formed through millennia of bird eczema – guano. In the mixture between the phosphorus and nitrogen-containing excrements and the calcareous coral rock, a colorless and odorless rock has been formed, containing about 90% lime-phosphate, which is an excellent fertilizer.

The People: The Naurus are descended from immigrant Polynesians, Micronesians and Melanesians. The indigenous population today accounts for just under half of the total population. The other half consists of Australians, New Zealanders, Chinese and workers from Tuvalu, Kiribati and other nearby islands. There are two men for each woman.

Capital: Since there is no urban center (the entire island can be crossed in an hour’s walk), no formal capital exists either. The government meets in a building opposite the airport in the Yaren district.

Government: Baron Waqa has been the country’s president since June 2013. He is appointed by Parliament which has 18 members elected for a 3-year term.

Armed Forces: Does not exist. Australia is responsible for its defense.