Hondura, State of Central America; 112 100 km2, 9.6 million residents (2019).Honduras is Central America’s second largest country and borders in the northwest to Guatemala, in the south to Nicaragua and in the southwest to El Salvador and has coast to the Caribbean in the north and the Pacific in the south. In addition to the mainland, several island groups are included. The capital is Tegucigalpa (1.1 million residents, 2015).

Honduras has a long coastline to the Caribbean in the north and a very short coast to the Pacific in the south. Most of the area in between is a highland.

The country’s constitution states that the president has the executive power. The president is elected in direct elections for a four-year term. Parliament, which is also elected for four years, has the legislative power and is elected by universal suffrage. Honduras, which became independent in 1838, is the second poorest country in Central America.

Traditionally, the economy is highly dependent on commodity exports, mainly coffee, sugar cane and bananas. But lately, tourism and industry, mainly in the form of compound factories, have grown in importance. The country is highly dependent on the US as an exporting country as well as as aid and lenders. In 1998, Honduras was hit hard by Hurricane Mitch, which destroyed about 70% of the country’s banana plantations.

During the 1990s, the economy grew steadily, but a coup d’état in 2009 meant a worsening economy when payments of loans and aid money were stopped. 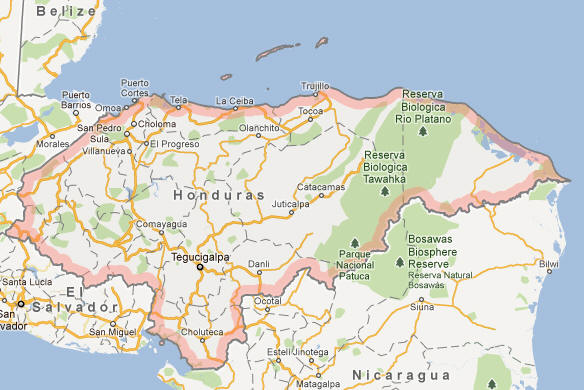