Where is Nauru located on the map? Nauru is an independent nation located in Micronesia. Check out the following images to see location of Nauru on maps. 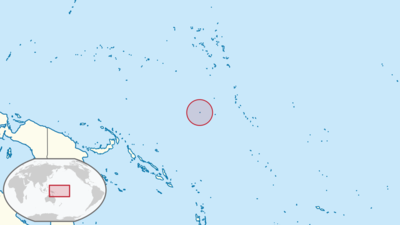 Nauru is likely one of those countries you’ve never heard of. Nauru is located in the Pacific Ocean on a coral island, roughly halfway between Sydney and Honolulu (Hawaii). To the west, Nauru is bordered by the Federated States of Micronesia, to the north by the Marshall Islands, to the east by Kiribati and to the south by the Solomon Islands. Nauru is 53 kilometers south of the equator.

This satellite photo shows you how small Nauru actually is.

Nauru is a typical atoll that sits on top of a volcanic cone. It was created through the work of the corals, which lasted thousands of years. The island is only 21 square kilometers and you only need a few hours to hike around the islands. This can even be done in just half an hour by car.

The coast stretches over a length of 30 kilometers. However, the water area is around 320,000 square kilometers. Nauru stretches seven kilometers from north to south and five kilometers from west to east. The highest point is 61 meters high and is called Command Ridge. Only a few islands in the region have such a “mountain”.

The third smallest state on earth

Nauru is the third smallest state on earth and the smallest republic at all, about the size of the German island of Amrum. There are no rivers on Nauru, but artificial canals have been built on which boats can travel. The island republic does not have a capital, but there is a seat of government in the town of Yaren.