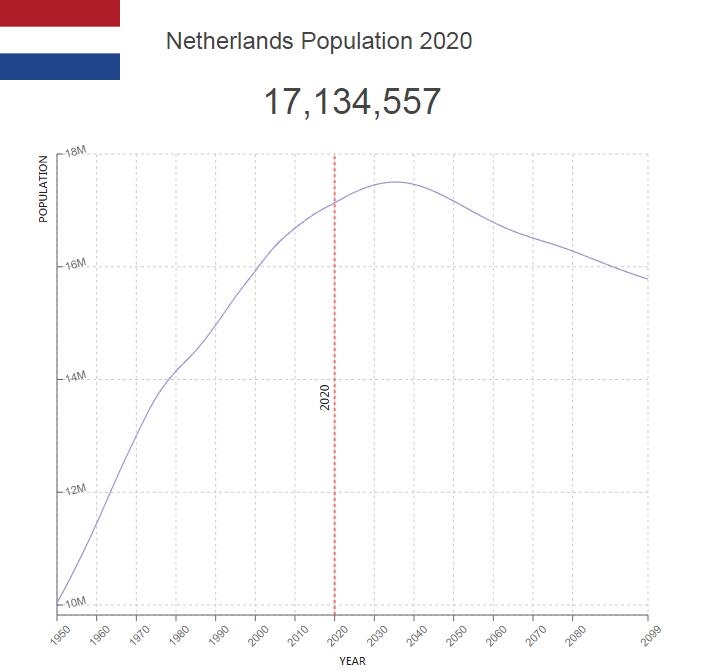 Known for its long-standing trade traditions, the Netherlands is one of the world’s most densely populated countries. The Netherlands, as its name suggests, is low-lying and almost a third is below sea level.

Growth has slowed primarily as a result of falling birth and death rates, but immigration from abroad has also slowed down in recent years.

Population of Netherlands by Year (Historical)

Major Cities in Netherlands by Population

The Netherlands has the highest population density in Europe, apart from the small states. It nevertheless switches sharply between the regions. About 90 percent of the population lives in cities and towns.

Among the residents of foreign origin there are many from the former colonies of the Netherlands. One of these groups is the Ambonese, who have roots in Ambon in Indonesia. They would not accept Achmed Sukarno’s dissolution of Indonesia’s federal structure and fled to the Netherlands when the colonial rule ceased. Another larger group of immigrants has roots in Suriname: When this country became independent in 1975, many feared poverty and distress and went to the Netherlands. By the way, the Netherlands has many immigrants from Turkey and Morocco.

In the north of the Netherlands, in the province of Friesland, the Frisians live, and in the post- World War II period these had to fight to get Frisian language and culture recognized.

In Noord- and Zuid-Holland the dialect is Dutch, except in a part of Noord-Holland, where the dialect is a mixture of Frisian and Dutch. The Flemish dialect is spoken in the southern part of Zeeland (Zeeland Flanders), in Brabant Brabant, Brabant and Limburg Limburg.

The dialect differences in Dutch can be very large, and different dialects are often not mutually intelligible.