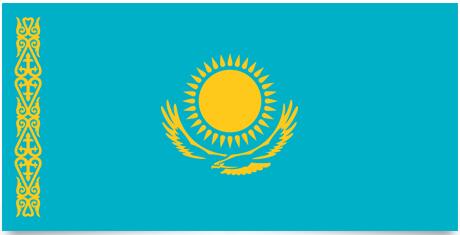 The flag of Kazakhstan was not adopted as a national flag until June 4, 1992, but then with the internal appearance in red. In practice, however, the colors included in the flag of Kazakhstan were used as early as 1992. The flag is light blue with an eagle and a sun above, and at the inner edge there is a ribbon with an intricate pattern.

The blue color in the flag is traditionally Turkish and represents the sky. The eagle is a steppe eagle that is a symbol of power previously used by Genghis Khan. The sun with its 32 rays symbolizes together with the eagle love, freedom and the aspirations of the people. The intricate pattern is golden and represents the culture of Kazakhstan.

Dictatorship, near allies of EU and US.

Government: Republic with Presidential Reign. Since December 1, 1991, Nursultan Nazarbayev has been the country’s president, re-elected residents 1999, 2005, 2011 and 2015. Bakhytzhan Sagintayev has been prime minister since September 2016. The House has two chambers: Mazhilis (Assembly) with 77 members and the Senate with 47.