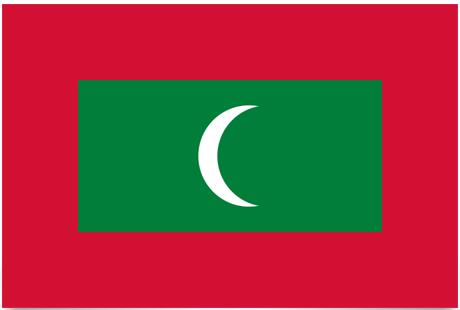 The crescent moon is a classic symbol of Islam, also the color green, but it is also said to be the color of hope. The color red is the blood shed in the struggle for freedom.

The first flag for the archipelago was initially completely red, it originated from the flag used by Arab seafarers who traded with the islands in the early ninth century. Under the British Protectorate from 1887, the flag had short slashes in black and white at its innermost edge. At the beginning of the 20th century, the crescent moon was added. When the Maldives became completely independent, the black and white field was removed, and the current appearance of the flag was adopted on July 26, 1968.

The Maldives island community of the Indian Ocean is made up of 1,200 coral islands and islets, of which only 192 are permanently inhabited. The archipelago is located southwest of India and Sri Lanka. The height above sea level does not exceed 3 meters. Apart from coconut trees – which are very widespread – the vegetation is sparse. The climate is tropical and characterized by the monsoon. No mineral or energy deposits exist. The fish stock is the most important natural resource.

The people: The Maldives population comes from the immigration of Dravids, Indians and Singaporeans from India as well as Arabs.

Religion: Islam (officially and unanimously proclaimed) of the Sunni direction

Language: Divehi (official). Belongs to the Indian language tribe and is mixed with Sinhala. English and Arabic are also spoken.

Political parties: Majlis – or parliament – is elected through direct elections. It proposes a presidential candidate who is subsequently put to the referendum.

Government: Republic with Presidential Reign. Abdulla Yameen has been President since November 2013. Legislative Assembly: The 50-member People’s Council, of which 2 male members are elected for a 5-year term from each atoll. Another 8 have been appointed by the President. Political parties were only allowed residents 2005.

Armed Forces: About 1,000 who complete tasks such as army and police force.