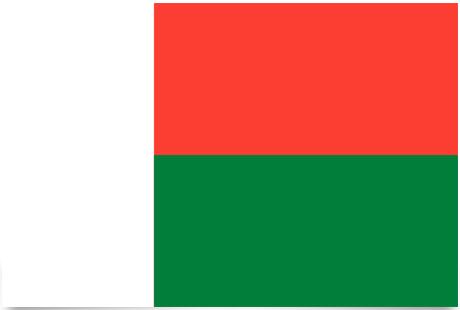 The flag was adopted on October 14, 1958, two years before the country became independent from being a French colony. However, after a referendum, the country decided to join France in the French Union.

The colors red and white are typical colors for Southeast Asia, which people immigrated to to Madagascar and it was the colors that adorned the kingdom of Merina from the 1790s until the country became a French colony in 1896. The white color stands for purity, rice cultivation and the female traditional folk costume ?? lamba ??, red is the clay that covers the walls of the house and green symbolizes the national symbol Ravenala Madagascariensis (The Tree of the Travelers).

Madagascar is one of the largest islands in the world and is separated from the African continent by the Mozambique Canal. The land has a large central high plateau of volcanic origin, which is dry and humid, to the east covered by rainforest and to the west by savanna. The country’s eastern part is very rainy, while the rest has a drier tropical climate. The majority of the population is concentrated in the central highlands. Rice and export crops are grown in the flat coastal areas: sugar, coffee, bananas and vanilla. Cattle farming is spread throughout the island and is another important activity. The country’s most important mineral resources are graphite, chromium and phosphate. Its most serious environmental problem is deforestation. It is estimated that about 75% of its forests are destroyed. The sparse treatment and discharge of organic waste have polluted many of the country’s rivers. Madagascar is considered a major biological reserve, although many species are at serious risk of being eradicated due to the cultivation methods that have been used over the centuries. The destruction of the rainforest exceeds its ability to be recreated.

Languages: Madagashi and French (official). Furthermore, hovba and other local dialects are spoken.

Government: Hery Rajaonarimampianina has been the country’s president since January 2014. Olivier Mahafaly Solonandrasana has been prime minister and head of government since April 2016. Parliament has two chambers: the National Assembly with 151 seats whose members are elected by direct election and for a 5-year term, and the Senate with 60 seats.